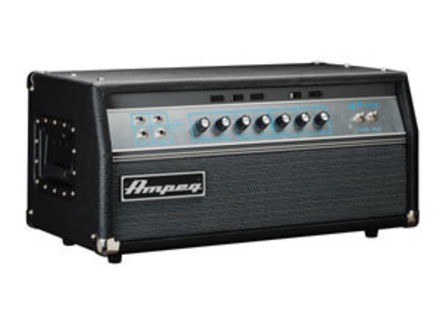 Buy this productView price information >
View other reviews for this product:
300 watt all-tube, 2 channels, corrections minimalist but that's why we love it!
A vintage look perfect for fans of the 70's like me, but for others, so it imposes on stage ...

Easy to use, remember that this is for bassists ... but even a donkey would get a killer sound with it!

Sound? Well, it's a box Rock, a beast of war, a grinder eardrums ...
For Classic Rock 70's or Hard Rock 70's, used with my details (62 & 57) or my Thunderbird and coupled to a SVT810AV + a SVT215E, it moves badly, it moves as much air and it vibrates the slip, I the guaranteed! The sound is clean, clear and accurate whatever the volume, media-rich rocks, hoarse and raspy so characteristic of the old Ampeg SVT, but also knows how to fatty wish when you ask him ... with my Bass Big Muff, c is pure bliss! Sometimes, I put a SVT412HE to replace one of the two previous speakers, and it is always enjoyable ... suddenly, as I'm a guy too, I've bought a second ... I do not miss more than a second 4x12!

I use them now for a little over 2 years without any problems ... I've owned a few years ago SVTIII heads (not pro!) V4B an old, an old V6B one of the first SVT Classic in 1994, I kept 15 years, I missed when I sold it, but I do not regret any more since I switched to the VR ...
Quality / price ratio? Justified, I think. A choice I would do without hesitation, if it again ...
See the source
Did you find this review helpful?yesno
Cookies help us improve performance, enhance user experience and deliver our services. By using our services, you agree to our use of cookies. Find out more.