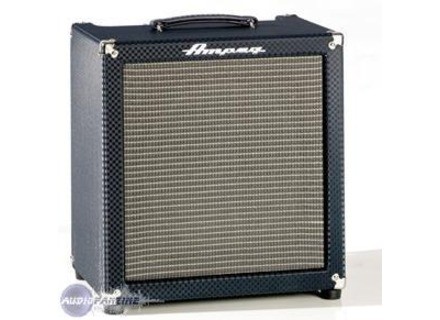 View other reviews for this product:
It looks like a smaller version of the Rocket 100 Combo, which it trys to live up to ... sort of.

I bought it as a more portable version of the Rocket 100 Combo, especially since I wasn't playing any large rooms. It was used and affordable, so I gave it a try.

Actually I no longer like much about it ! I don't DISLIKE it, I mean it's not a bad amp, but I always reach for something else now. My tastes have changed, and I consider certain features important that are not on this amp.

Over time, I've stopped using it. It's heavy for 50W, it does NOT sound much like the Rocket 100 [aka b100-r] ... it just sounds like a generic 50W combo. The lack of seperate gain and master volume knobs is frustrating, and there are no boost switches, etc, which would possibly allow 'waking up' this amp.

It's very well made, very reliable for what use I gave it before I 'parked' it ... and it was NOT new when I got it. It's built like an old school USA Ampeg ... cuz thaz what it IS. The power cord is not removeable ... it that old school or what ?

I'm rating it a '3' cuz it's a perfectly decent but nothing special amp. Almost every aspect is a '3' ... meaning 'average' ... except for the weight which is a negative, but weight is compensated by reliability, which is a positive of at least equal 'weight'. So, it's a '3'. If you get a good deal on one, and you like the tone, bag it ... but it's not something I would hunt down like some Holy Grail amongst amps.