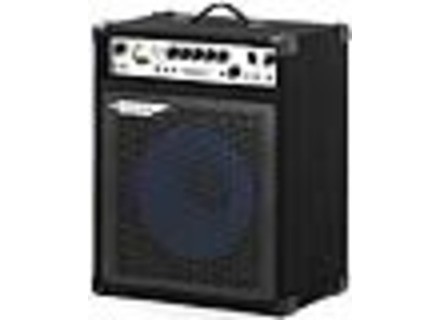 Value For Money : Excellent
View other reviews for this product:
Transistor is a combo bass, 180 watts (with two HP). The connection is very complete, an entry for low active and passive one for an effects loop, line input and a DI output and two outputs for HP.
Level settings, is very comprehensive: there is a gain, a master, a 5-band equalizer, and a nice effect, the "sub-harmonic" which adds a note an octave, a compressor, a boost of treble, a serious boost.
The only problem, as mentioned above is the weight (26 kg), which makes it very uncomfortable to carry (I usually leave it in the local repeat my group ...). Note: This is a special edition of Electric Blue, specially made for Thomann.

The knobs are fairly reactive, EQ is effective. You find it quickly, we made some tests with the sub-harmonic, it adjusts the compressor and go!
The manual is very comprehensive, it is the same on all the amps Ashdown. It is only in English but it does not pose a major problem.
This amp is very pleasant to use and is built to last (due to its weight, it is better ...), I've had 4 or 5 months, he did a lot of rehearsals, concerts and more as it is always nine.

I play in a metal band, and the T15 is just fine, but it is also great in other styles (there's a look at the different bassists who use Ashdown for yourself) .
I started using it with a 4 string Cort low end but decent for its price, and I now Ltd. 5 string with active 3-band equalizer and a pleasure, we can sculpt the sound very precisely ! I have a Boss ODB-3 and after a short time settings, I got a super overdrive.
Playing with the EQ and boost the treble and bass, you can almost do anything, except perhaps the ultra-clacking sounds like Death Metal, it will add a distortion pedal or an equalizer. For the slap, it triggers the treble boost and a joy! The sub-harmonic is very pleasant in the treble, but for serious, it tends to remove the definition of the sound ... Therefore the tune.

As I said above, I use it since December 2008 (Christmas gift).
What I like most about this amp is its sound (thankfully!) And its very complete! The only big downside is its weight. I try to put wheels one day ...
Before this amp, I played on the Hartke I did not like the sound in the treble, too metallic aluminum due to HP, and I tested a Hughes & Kettner Kick Back which I was not at all convinced. I had negative perceptions Ashdown, I did not include the design (It changed today, I find these magnificent creatures ...) but whenever I tried one, I was hooked and my next amp will probably be the same brand!
The quality / price is more than good, 290 € on Thomann, we have a great amp without breaking the bank!
With experience, I think I would do this choice, the T15 and I advise all bass players who want a big without sacrificing an arm!

EDIT 18/07/2009: I just saw that this amp is no longer available on Thomann, Ashdown has probably stopped production. If you want one, you will look on the side of the occasion ...
See the source
Did you find this review helpful?yesno
Cookies help us improve performance, enhance user experience and deliver our services. By using our services, you agree to our use of cookies. Find out more.