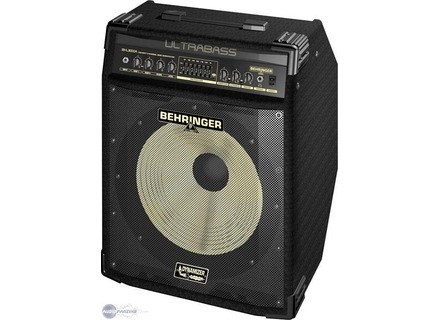 View other reviews for this product:
- Combo dlivrant transistors 300W, equipped with an HP 15 "Hartke Aluminium kind. Positionable in return.
- Connectors almost complte the back of the amp: DI, making CDs, footswitch, effects loop. It lacks the possibility of adding a baffle deuxime. Too bad.
- 2 channels, one of which is saturated with the sounds ddi (gain + shape + level). quilibrage both channels thanks to the knob "level". Practice.
- Effect "octave". (ULTRABASS at Behr)
- Compressor.
- 7-band equalizer.

Config a bit complex for 3 neurons as a bass player I who used an old Fender with three simple knobs and a canal.

That said, the sound is satisfactory, and all sounds are possible thanks to two channels, the equalizer graph.

Perfect for styles zik ncessitant a good 15-inch 300-watt grow. You get the picture ...
My bass has 2 humbuckers, trs is good in the bass, everything. Rock-Reggae-Roots.

Outside has this amp, for the many rglages before it will delight fans of percussive techniques and shrediques. If so, a few bassists INTERESTED ...

The compressor is very well, and adjustable sensitivity.

The channel is saturated in the adobe. What a bass player uses, from Lemmy (respect!) And its clones. Unnecessary. Prfrez a Big Muff.

The ULTRABASS is a gadget (octave). That said, the amp cash without flinching the octave, which is not the case with all amps.

Personally, I only use the compressor, which is perfect.

While the mea culpa!

made some time I dnigre Behringer amps (while using some pedals brand) without further notice on the issue that the views of snobs who only play on Eden or SWR ...

And then I cracked BXL 3000A I bought this because I was tired of trans my Fender 70 kg on the stairs (oh RPTES the attic) and the sc microscopic ties. That is half the weight and size. Well, worked!

This amp has 7 years he has never seen rparateur no grsille knob does, everything works perfectly, the sound is standard and complies with its own bass as you enter it. He bowed in return, has a grip, I told her pos wheels is nickel.

I think some useless gadgets (channel saturated octave), and absence of a cabinet decision Supp. But if we make the choice of compactness (in my case), it's perfect. Frankly, its the diffrence is minimal with my Fender. Great little amp RPET and caf-concert. 300 W even when. Drisoire price under performance new or used ...

A good plan for bassists who privilgient dsargents or showing off the effectiveness of logos that we pay a fortune, believe in an old brand dtracteur Sino-German ( gemano-Chinese?)

Promised, if I galres with this stuff, j'dite ...
See the source
Did you find this review helpful?yesno
Cookies help us improve performance, enhance user experience and deliver our services. By using our services, you agree to our use of cookies. Find out more.