Agrandir
Add this product to
Fender Frontman 15B
1/ 7 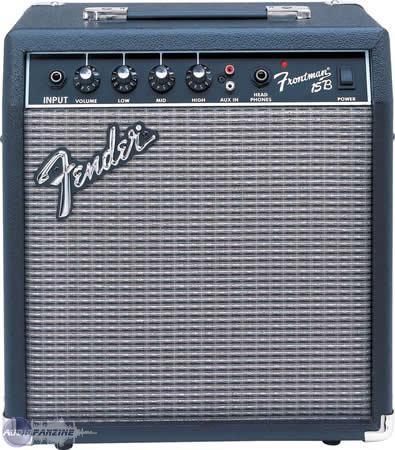 View other reviews for this product:
MGR/Jack Elliott (Ignorance Bassist)

Publié le 07/29/03 à 15:00
I got this for Christmas with a Squire P-Bass and a strap etc. It cost £79. My parents bought me it because I really wanted to learn and at the time, this was the best practice amp out there. Its and older style one (with the grey fabric grille.) This version was superceded by the Marshall MB25MkII and the Laney HCM30B so Fender repackaged it and changed a few bugs and brought out the new version (with a black metal grille and four silver screws visible.)

Its compact and light, its easy to carry one-handed and not to bulky. It has a great tone and sounds brilliant up to about 5 volume. When I practice I dont use my effects pedals (cant be bothered

I just have a really fat tone and this amp really sings. Also it is loud! At 3 volume it is really to lud to practice with. I end up using the head phones a lot.

It easily out classes my guitarist's practice amp. (If your reading Paul, just accept it.)

It clicks when your fingers touch anything metal because it isnt grounded properly. Also, past about five volume the hissing is just to much. But seen as its loud anyway, you never have to turn it up. For these few reasons, if it was lost or stolen Id buy the Marshall. Also, on the first version there is no speaker out, another bug that was solved with the new one.

Very well built. Tolex covered with metal corners. About the only weak point is the fabric grille over the speaker, which is why the re-issued version has a metal one.
Seen as it resides in my room and is only occasionally moved to go to a friends house I cant really talk about the quality to much.

All in all a good practice amp. It was the best, then it wasnt, now the re-issue is a serious contender. For under one hundered pounds, check out this, the Marshall or the Laney. This is possibly the longest review Ive ever written you know.
Well it wasnt, until I added that last sentance, which is now not the last sentance but the penultimate....