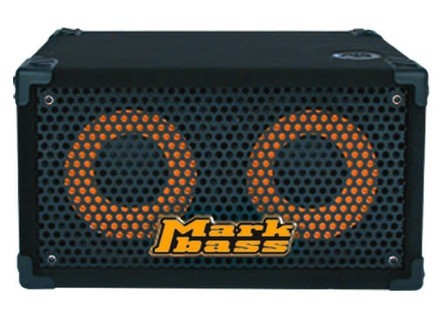 View other reviews for this product:
It's difficult to mistake the blazing yellow Markbass logo anymore, especially after all the buzz about the amazing Little Mark series heads. The 102P is a 2x10' 400 watt cabinet with a piezo tweeter. It's a beast of a cabinet at just over 20 lbs, and the dimension are between 1 and 2 feet on any side, so it can fit in the front of your car with your bass. As a matter of fact, I've been able to take my bass, amp head, and this cabinet on the bus with little to no troubles due to its small size and play rock shows downtown and not worry about being heard. The cabinet is available in 4 ohm or 8 ohm versions, and all come with neodymium speakers.

I got the item on a trade in. It had a $600 price tag on it. I bought it because the only portable amplifier I had was a Bassman 100 combo amplifier, and 100 watts through a single 10' speaker with a tweeter wasn't quite cutting it anymore even for club gigs, especially with an upright bass. The Bassman was and still is a great amp, but I needed something bigger and something really portable that would allow me to bring an amp head with more power. Now I use the Markbass cab and my Fender Bassman 50 (the vintage all-tube version...not the MOST portable in the world, but it works) together on almost all of the gigs I get. If they're too big, I add an SWR Goliath 4x10' run in parallel with the Markbass.

The clean and forward sound of Markbass can't be denied. Marco Vergiliis has been producing top-notch products through and through from day one with pristine punch and clarity but also with a warm bottom end that fills the room. I like that it's 23 pounds and the size of a very small suitcase, because that's what I bought it for: portability with a great sound. One of my favorite features of the cabinet is the tweeter knob on the SIDE of the cabinet rather than behind it. It's strategically placed so that whether the cabinet is standing up or lying down on top of another cabinet, you don't have to stick your butt out to the audience to reach around and adjust the tweeter to the room. Now it's on the same level as your amp head and all the other knobs and dials you normally adjust. Marco de Vergiliis thinks of everything. A true consumer's business-man. The handles are recessed and feel about as solid as tank armor without any of the weight. The handle location is perfect to make carrying it a breeze.

I have no complaints about the unit. It does everything it could be expected to do and more. A perfect 5 stars here.

I've never heard of a Markbass amp head or cabinet breaking. Treat them well and they will serve you for a very long time. I've never had so much as a crackle or an ounce of feedback, let alone problems with construction. Another set of 5 stars here.

Crystalline tone. Ergonomic construction. Massive power at just over 20lbs. Ability to fill clubs with the full, warm, crisp bass tone that Markbass is known for. I can't find a single fault with it.