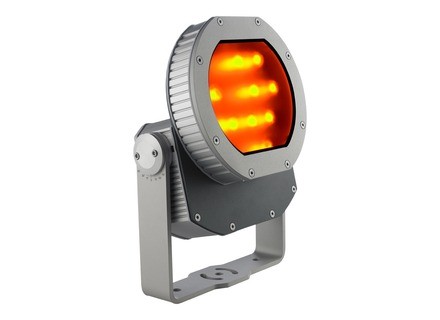 Martin Light add LEDs technology to their Exterior line of indoor and outdoor architectural washlights with the Exterior 200 LED, a short-throw complement to the existing range.

The Exterior 200 LED is a programmable luminaire housed in a weatherproof casing and offering full RGB + Amber and White color mixing. It features a comprehensive color range from 44 high power LEDs and choice of optional spread angles.

The Exterior 200 LED only requires minimal service and maintenance, its IP65 rating allowing it to withstand thoug outdoor conditions.

With five colored diodes (Red, Green, Blue, Amber and White) instead of the usual three, the Exterior 200 LED is able to offer a broad range of colors.

The Exterior 200 LED is available in a choice of narrow, medium or wide beam options for use at distances between approximately two to six meters (6 to 20 ft). The lenses are also available as accessories, allowing the luminaire to be reconfigured on site if necessary. When used without a diffuser lens, an even narrower beam can be achieved.

Pixel boards for the Exterior 200 LED are individually measured and calibrated, guaranteeing standardized brightness and color.