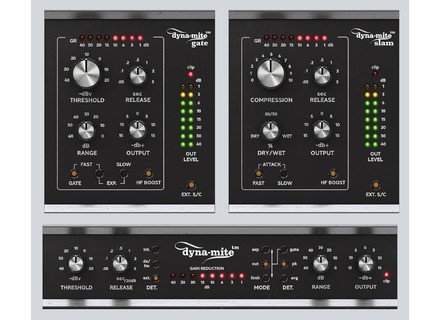 Buy this productView price information >
View other reviews for this product:
Softube's Valley People Dyna-mite plug-in is a multi-purpose dynamic processor, acting as an all in one compressor/limiter, gate, and expander. Softube has teamed up with a number of different hardware manufacturers out there including Valley People to put out plug-in versions of popular outboard gear, and the Dyna-mite is one of them. I don't have this plug-in, but I've used it a good amount at the studio that I work at as we have all of the Softube plug-ins. Using the plug-in is fairly straight forward, even if you haven't used the original hardware version. If you've ever used a compressor/limiter before, you'll certainly recognize the parameters at hand here since they're really simple. It's got knobs for threshold, release, range, and output, and is also has side chain options and a mode switch to choose between limit, gate, and an expander mode. It also has a guide at the bottom that shows you in writing your signal flow, which is a really cool feature and isn't something that I really seen anywhere else. I haven't seen the manual for this plug-in so I can't say anything about it other than it probably isn't necessary for most users.

We've got the Softube Valley People Dyna-mite plug-in running on a few different systems at the studio where I work, as it's really a studio complex with a number of different recording rooms and mixing suites. They're all Pro Tools HD based, so we never have any problem at all running plug-ins in general. This plug-in in particular doesn't seem like it takes up much processing power, but again having only run it on an HD system, it's hard to say how it would run outside of one...

The Softube Valley People Dyna-mite is a really complete, flexible, and versatile plug-in. For starters it sounds fantastic and is very easy to use. I like plug-ins that are emulations of analog gear, as they seem to in general have a nice feel and it's especially cool when you've actually used the original as I have with this. I've never had a chance to shoot out the two of them together, but I will say that this plug-in sounds really very good and from what I remember sounds pretty close to the real thing. If you're looking for a plug-in to serve as an all around dynamic processor for mixing, the Softube Valley People Dyna-mite is a great way to go.
Did you find this review helpful?yesno
Cookies help us improve performance, enhance user experience and deliver our services. By using our services, you agree to our use of cookies. Find out more.