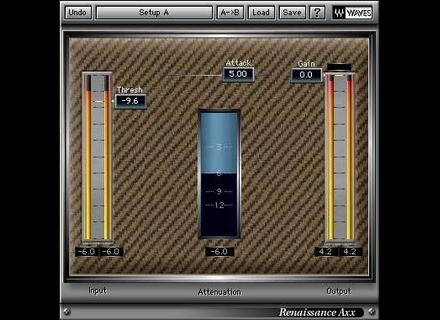 Renaissance Axx, Software compressor from Waves in the Renaissance series.

Buy this productView price information >
View other reviews for this product:
The Waves Ltd. Renaissance Axx is a simple compression plug-in for guitar. It's part of the Waves Renaissance bundle which has some similar plug-ins for other applications. I've got all of the Waves plug-ins on my system at home, and installed all of them at once including this one. The process is easy and shouldn't even be an issue at all. Learning how to use the plug-in is even easier! It's just got parameters for threshold, gain, and attack. It's great for getting a really quick guitar compression sound, as not much thought needs to go into it at all. It's easy enough to use that a manual isn't at all necessary.

I'm currently running the Waves Ltd. Renaissance Axx plug-in in Pro Tools LE 8 on a Mac Book Pro lap top consisting of a 2.2 Ghz Intel Core 2 Duo processor and 4 GB of RAM. I run Pro Tools LE with a Digi 002R audio interface or a Digidesign Micro Box if I'm on the move. This plug-in doesn't seem to take up much processing power as I've never had a problem running a few instances of it at a time within the aforementioned recording configuration.

The Waves Ltd. Renaissance Axx is a great little plug-in that although not versatile, is perfect for touching up guitar tracks with a bit of compression. I've used it on both acoustic and electric guitars and find it to be equally effective on both. While not as drastically effective as the Renaissance Bass plug-in, it's still a great one to have in the plug-in suite. In fact, the entire Renaissance bundle is really one that every DAW user should have, as it's inexpensive for what you're getting, and you're getting a lot with it! If you have the bundle and haven't checked out Renaissance Axx, it's definitely about time that you do so. If you don't have the Renaissance bundle, it's definitely one worth considering!
Did you find this review helpful?yesno
Cookies help us improve performance, enhance user experience and deliver our services. By using our services, you agree to our use of cookies. Find out more.