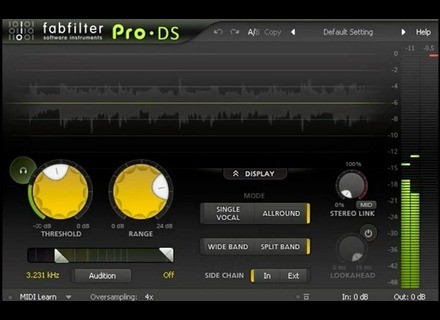 Value For Money : Excellent
Buy this productView price information >
View other reviews for this product:
To install Next next next, Music!

And it all rolls only.

I tried a number of ais de-esser huge but none gave me satisfaction
even that of "Sonnox" I do not really liked.

Do not neglect all the same sounds taken! It is beautiful and well the singers as the singer must learn to be the best place to limit ssss chhhhhh ect .... Taking an engineer and his or studiste man must also learn how to properly place these microphones.

That being there is often troublesome frequency especially the fact that it is often up close enough to the mic for the room or not treated badly does not interfere too much in the socket. Then there also as the "mouths" that whistle + or -


But to return to our sheep on the plugin basically I would say:
For those desperately seeking and the de-esser that works and does not track rotten as there FabFilter Pro-DS. It could almost speak of automation here. Plugins actually has a function that allows him to anticipate the likely frequency of problem and then treats. Once tamed some adjustments he made to wonder plugin. A demo version is, I believe, available.

A sssssssstudios you.
See the source
Did you find this review helpful?yesno
Cookies help us improve performance, enhance user experience and deliver our services. By using our services, you agree to our use of cookies. Find out more.