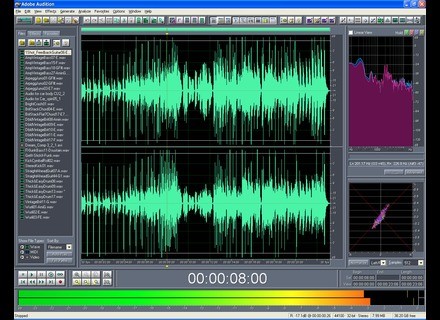 Product replaced by the Adobe Audition 4.

View other reviews for this product:
Sequencer and multitrack audio editor.

Implementation a breeze. In French, it has just a few flaws in translation, but that's all.

I know this program since its inception (and Cool Edit Cool Edit Pro) and I'm using version 1.5 today although he is currently in version CS6 (early March 2013). Even professionals use the radio again and you'll quickly understand why.

First, it is a LULM (= Ultra-Light Motorized Software ^ ^). The installer weighs less than 40 MB: this allows it to be stowed in any software package without weighing it so excessive. The following versions are at least 150 MB then it is indestructible: it is ultra-stable. It's simple: it does not crash ever. Which is necessarily the case with newer versions. And again, if in case it is the Windows plant, if it is at the time of startup files or projects that have not been closed properly, it can recover and recharge. Then it is a true multitrack: you can arm all tracks if needed (Samlitude - at least version 6.0, this is not the case: only one track can be armed at a time) and each track can receive individually any sound card input and send audio to any output. Then its spectral vision is daunting. Then it all (or almost) the functions needed to work on audio files. And finally, it runs under Windows 8 64-bit, which is not the case of version 3, in any case (newer versions: not tested).

It's just too bad he does not take care of the ASIO protocol, it supports the protocols WDM / MME. At least as regards the PC version. So far, it bothered me not because the sound card I used (Sek'd Prodif Plus, a PCI 12 inputs - outputs including 8 via ADAT) is even multichannel WDM / MME but this is no longer the If my new sound card (M-Audio Fast Track Ultra 8R, a USB 2.0 8 inputs - outputs) that it is only through multi-channel ASIO. WDM / MME, only channels 1 and 2 are supported. I am very annoyed ...

I mainly use this software to scan and mastering audio. In that context, it is unfortunate that this version does not yet have other functions mastering and audio restoration which mostly offset azimuthage qu'Audition has since version 3.0. Anyway, the RX Izotop Advenced I also used (but much more rarely) also.

It should just be careful NEVER save audio files during playback. In this case, it can record audio files empty (it's a bug).

This software (or at least this version), which is hard to dethrone, became a classic of the genre that should enter the Museum of software ^ ^

What I love in this version:
- Software Ultra-Light Motorized ^ ^
- Do not plant
- Precision in the waveform
- Very ergonomic
- To all the functions we need (almost)
- Runs on Windows 8 64-bit

I like a little less in this version:
- Do not support ASIO drivers AAAAARGLLL!! Not only supports the WDM / MME
- Lack of certain features which especially mastering a spell azimuthage
- Do not generate a PK file for 24-bit audio: loading time audio files involved is long ...
- In Multitrack mode, most of the changes to the audio files are so destructive
- The preset settings for each algorithm processing peuent not be saved in separate files.
See the source
Did you find this review helpful?yesno
Cookies help us improve performance, enhance user experience and deliver our services. By using our services, you agree to our use of cookies. Find out more.