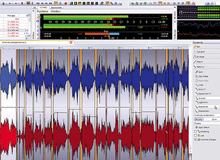 Why You Need a Dedicated Digital Audio Editor

For some common audio editing tasks, a digital audio editor is often better than your DAW
By Mike Levine on 02/11/2016

When it comes to music-production software, DAWs get all the glory. And for good reason: You use them for all the glamorous parts of the process, such as tracking, overdubbing and mixing. Conversely, digital audio editor applications are relegated to the grunt work, and don’t get talked about as much. Nevertheless, if you don’t have an audio editor as part of your software arsenal, you should consider getting one. In this article, we'll tell you why.

For the most part, you use a digital audio editor when editing or processing individual mono or stereo files — often stereo mixes — although there are multitrack audio editors, as well. The biggest advantage of audio editors is that for certain types of tasks, they’re more efficient than your DAW.

DAW editing is, for the most part, non-destructive. Some DAWs do let you selectively apply destructive editing (for example Pro Tools' AudioSuite processing), however. Many DAWs let you export your file temporarily to an external editor where you apply destructive processes — for example normalization — and then the processed file is reimported back into your DAW session.

You might wonder why you would want to use destructive editing in an audio editor when you can accomplish the same things non-destructively in your DAW? There are a couple of reasons: First, some processes, like time stretching and pitch transposition are destructive by their nature. But the most important answer is that for certain types of tasks, destructive editing can be a big time saver. You do your edits, hit save, and they’re written to the file. Whereas in a DAW, after you’re done editing you have to bounce (aka “export”) your files to disk, which is usually done faster than realtime, but still takes a lot more time than a save does in a digital audio editor.

If you’re working on, say, cleaning up start and end points on a group of mixes, and you have 10 or 12 songs to deal with, it can be a lot quicker to do the trimming in your audio editor, rather than importing the files to your DAW, editing them, and then waiting as you bounce each one to disk. If you’re doing post-production editing on a long-form project, for instance a video soundtrack or podcast, where you have to do a large number of edits, you can save significant time working in an audio editor.

Don't let the term "destructive editing" scare you off. It’s a little misleading, because today’s audio editors have multiple levels of undo, so you can usually revert to a previous state if you make a mistake (before you save and close the file, that is). Still, it’s wise to make a safety copy of whatever you’re working on before you start the edit.

Let’s say you have to normalize a stereo file. Unless your DAW offers a destructive processing mode, or lets you export a file to an external audio editor, it’s often faster just to do it in an audio editor. The same goes for making little volume changes to sporadic parts of the program. Using your editor’s “amplify” or “change gain” process (which all of them have), you can quickly go in and change the level of a peak here or a section there more quickly than you could drawing in an automation curve in your DAW.

I do a lot of podcast editing, and I use my audio editor all the time to smooth out levels in the dialog when I don’t want to introduce the sound of a compressor. I also routinely remove breaths, coughs, glitches and so forth. For all of those tasks, my audio editor saves me a lot of time.

Another difference, that’s important to note between editing in a DAW and in an audio editor, is when you cut out a section of audio in an editor, it automatically splices the remaining audio together at the point of the edit, thus changing the duration of the file (see image on left). In the default editing mode of a DAW, that doesn’t occur. You cut out a section, and you’re left with a hole where that section was. You can then choose to close up that hole by pulling the right border of the edit backwards in time to join it with the left. But that requires a separate action, unless your DAW has a “shuffle” editing mode and it’s active, in which case the right border automatically moves to meet the left after you make a cut. Even so, you’d still have to then go in and manually add crossfades to smooth out the transitions.

So if you’re doing edits where you’re intentionally removing sections of your song or other audio material, it’s much more efficient to use an audio editor your DAW. You only have to make the cuts and the software takes care of the moving and splicing-together part, and there’s no need to add crossfades.

One caveat: if you’re editing a video soundtrack in an audio editor, don’t splice out any time from it, or it will throw everything to the right of your edit out of sync with the video. There are good reasons for using a destructive editor on a soundtrack, but you have to be careful about not changing the timing.

Another area where audio editors are often a better choice is format conversions. For example, going from WAV or AIFF to MP3. Again, you don’t have to go through the bounce process, which saves time. In addition, many DAWs only offer a limited choice of format conversions, whereas most audio editors give you a lot of choices. Often an audio editor is also more convenient for doing sample rate or bit-depth conversions, especially if you have to do so on a bunch of separate files.

Let’s say you have a bunch of mixes that you’re going to upload to your website, but you haven’t yet trimmed the front and back of them. Rather than opening them all up on separate DAW tracks, trimming, and then bouncing out each one individually, you can quickly open them in your audio editor, trim the front and back, do any other processing you need to do, and save them.

If you really want to save time, many audio editors offer batch processing, which allows you to specify not only a type of process, but format changes, destination folder changes, name changes and more in advance. Once you’ve setup your batch actions, you simply drag all the audio files into the batch processing window (or select them in a dialog box) and your editor will execute the batch actions at what seems like lightning speed. It’s way faster than you could ever do it manually.

Here's a hypothetical example that will illustrate the point: Let’s say you’re making MP3s from WAV files that consist of a bunch of rough mixes from your album project to share with your colleagues over the Web. Not only do you need to convert them to MP3 to make them a more convenient size to download, you want to run them through a limiter to raise their volumes and make their levels more even, and put them in a new folder. Rather than doing all those changes individually on one file at a time, which would take a long time, you could set up a batch process and take care of the whole thing in a couple of minutes.

At times you’re going to have to deal with glitches and noise on your audio, such as pops, clicks, and broadband noises. A lot of audio editors have dedicated features to take care of those sorts of issues. For example Audacity, which is a free and surprisingly powerful editor, offers built-in denoising and declicking features. There are also specialized audio editors, such as iZotope RX, which is both a 2-track audio editor and a post-production and audio restoration tool suite. In RX you can fix just about any audio problem, and apply all manner of processing.

What’s more, audio editors typically can host your third-party plug-ins, so you can always apply processing from those if you want to, say, use a particular limiter or compressor or EQ on a file or even just a section of a file.

A number of audio editors also offer sophisticated mastering features. One example is Audiofile Engineering Triumph on the Mac, the cross-platform Steinberg WaveLab or Sony Sound Forge Pro on the PC.

You don’t have to spend a lot of money on an audio editor, although you certainly can. Audacity is a great place to start. It's cross-platform, handles multitrack editing, and has some limited batch-editing capabilities (it doesn't host third party plug-ins, however). If you want a slicker interface or more features, you can find quite a few titles on both the Mac and Windows sides. For the former, a really good value that doesn’t get enough acclaim is Hairersoft Amadeus Pro 2. Other Mac entries include Twisted Wave and i3 DSP Quattro. On the PC side you can go from something relatively inexpensive like Acon Digital Acoustica up to a program like Sound Forge, which is extremely fully featured, with plenty of others in between.