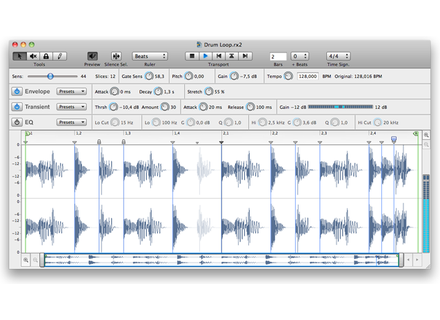 Value For Money : Poor Audience: Anyone
Buy this productView price information >
View other reviews for this product:
Recycle is a program that let's you import audio files and chop them into individual sections so that they can then be imported into sequencers and samplers that use the Rex file format. Recycle is a simple piece of software that does a small job. However, it does this job extremely well and is the only piece of software available that can effectively chop pieces of audio into individual sections and save them as a single file. Other programs such as Renoise have built in features that allow the ability to chop and re-edit audio files. However, this is not always convenient.

The program is good when it is used to chop up up drum loops, but can also be used for vocals and other sounds that contain dips in volume. These Rex files can then be imported and re-sequenced in a different order. Some devices, such as the Rex player in Proppellerheads Reason can also carry out a wide range of effects to an entire Rex file, which can then lead to a wide range of interesting effects. I found pitching slices within the rex file to be very interesting, as well as the ability to reverse certain slices. This meant that you could have some of the drums in a loop playing forwards, whilst others played backwards.

The software is very rarely updated, as it does a simple job well and does not need any additional features added. However, this new version does come with some improvements to the user interface, which can help users when they are using the program.

The new version has been designed so that it is compatible with operating systems that are 64 bit, such as OS X Lion for Mac. Another addition is the ability to gain tempo information that can be helpful when chopping up the audio. The user interface has also been updated and is now easier to navigate around.

A new waveform screen is also included that shows silent sections by dimming them on the visual image. This is useful for when an individual needs to manually chop up an audio file. The user interface has also now incorporated the R, E, W and Q keyboard keys which can be used to select certain tools on the main window.

What I liked about Recycle was it’s ease-of-use and the ability that you have in chopping up a wide range of different sound files. The program introduces a new aspect of creativity to the productions as sounds can be chopped up and re-edited in new and interesting ways. Many modern electronic musicians use these techniques in interesting and dynamic ways within the tracks. I found that the benefit of being able to chop up samples very useful.

The thing which makes Recycle so important as an audio software tool is that it is the only program that is available which can do the specific task of chopping audio files into individual sections, resulting in a Rex file. Other programs, such as Audacity can be used and will allow the individual the ability to chop individual sections from an audio file. However, this will be a long and fiddly process and the result will not be great. Therefore Recycle is the definitive tool for this job.

Recycle is an incredibly simple tool but is also incredibly important if you want to take sound files and chop them up so that they can be re-edited. This is a very important task to be able to do in just about all forms of modern music and is one of the key ways in which to sample sounds and reprogram them effectively. The only problem with this software is that it is rather experience for what it can do. However, Recycle is the best tool for this type of job and is an essential piece of software for anyone that is serious about music production.
Did you find this review helpful?yesno