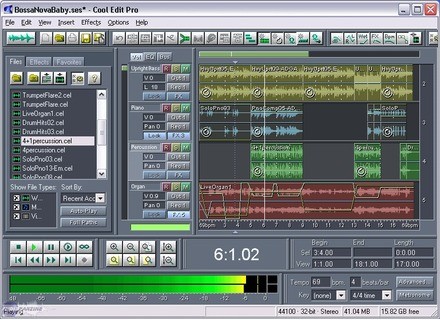 View other reviews for this product:
Cool Edit Pro 2 was one of the first audio recording programs that where computer based that I started using I think back in 2001 or so. I must say that this program was cutting edge not just for me at the time but for anyone who wanted to get into recording on a computer. I was amazed by the potential that this program had back then, just being able to do everything right on a computer screen and no need for a bunch of hardware gear in front of you to record your songs.

Cool Edit Pro 2.0 was very stable during the time that I was running it. I never experienced any problems with it, That was when I had an old Dell computer with the box screen (not flat screen) and a desktop tower. Music recording programs have came a long way since Cool Edit Pro, but I still think I have my copy somewhere around in my basement. I probably will never use it again though just because I have so many other softwares that can do the same thing that this can. But 12 years ago this software was top notch.

Cool Edit Pro 2 was the first version of Cool Edit that I have used, I think they had an earlier version but I didn’t get a chance to see what it was like and I know that I never will because they don’t make it anymore. As far as the value for the price of this software is great, Back in 2001 the price of it was not bad at all especially if you were used to buying hardware to record this was really cheap. I am extremely happy to say that I was a Cool Edit Pro 2 user, if I recall correctly I think Syntrillium was bought out by adobe. So there will be no more Cool Edit Programs, they are all Adobe Audition now.