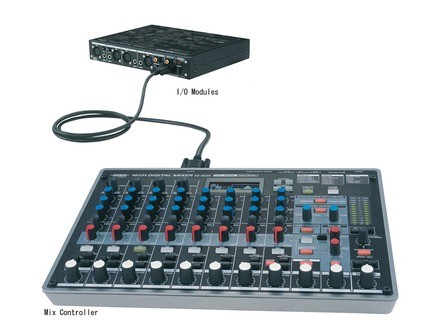 View other reviews for this product:
- Is the rack?
so for the case of acquisition, not for the table
- How many lanes, bus attendant, of dparts, returns ...)?
16 "tracks", include 6 mono and 4 Stereo, 6 dparts (roughly, counting and the phones) and a return to Premire finally, I've only been 3 days
- What is the type of connectors (RCA, Jack, XLR ...)?
4 XLR jacks and 4 in faade (tracks 14), two coax and two for otpiques between (11-12) and output sortiela numrique faade in the housing, derrire 16 rca jacks and 4.
On the table there is a mini-jack (between 15-16) two jacks (also 15-16), two control outputs (jacks) and a Stereo jack for headphones.
So in total, many taken ...

- The qualiseur paramtrique is it?
Yes, in addition to three bands each slice, there is a 16-band graphic assignable each track, and quite easy to ACCS (surprisingly)

- The effects section is it intgre? ...
5 FX inserts (compress), completion and effects of 6 5 Fx standards (reverb echo). It is little but using a computer, we can find happiness, the effects they use for a small computer without BPS.

For consoles numriques:
- What is the precision of chantillonage (bits / kHz)?
24bits/94khz, the standard being used ever, by default it starts in 16 48, like everyone else.

- Automation is it support?
Yes, fortunately, there are also a reminder of scnes, several banks of tracks and so on.

- What types of media are synchro? ...
uh, we speak of the external I'm not too familiar, I'll be up later.

In the end, trs good, I miss just fadders, automation is not a knob gnial, even if it's better that the mouse ...

- The configuration gnrale Is it easy?
For someone who used a table adj analog transition is smooth for the acquisition part, for the CONTRL software (DAW) is a bit more complicated but not insurmountable, AD s an hour of paramtrage in Cubase SX3 is happiness!

- The usual functions are they easily accessible?
yes, no problem to use software, it has four transparent pierces put on the table, with other functions are given, sufficient practice, the Systm that geeks use to Warcraft and other ...

- The manual is clear and sufficient? ...
open quickly.

Noise level, nothing wrong, I have not used the "room acoustic sensor", meaning the sound suited the pice Intgr with a sensor in the table. filters are effective, especially with the legalization 16 bands.

- What is the particular feature you like best and least?
most: the surface of CONTRL for squenceur
the least: no fadders! Finally, for the price ...

- Have you tried many other models before acqurir?
the yamaha, but according to CONTRL ...

- How do you report qualitprix?
The price reduction, was worth it, if only for the acquisition module, so if we add a table ...

- With the exprience, you do again this choice? ...
Yes, unless edirol us out with a version fadders ...
See the source
Did you find this review helpful?yesno
Cookies help us improve performance, enhance user experience and deliver our services. By using our services, you agree to our use of cookies. Find out more.