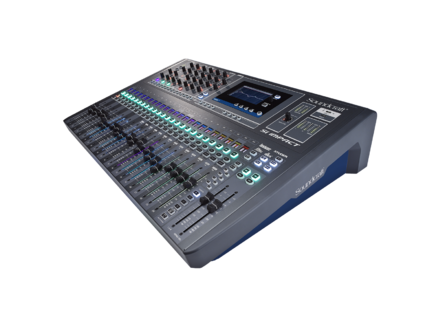 Value For Money : Excellent Audience: Advanced Users
Buy this productView price information >
I bought this mixer after a long quest: I wanted a digital mixer which behaved and provided the ergonomics of an analog model

PLUS, with a USB connection to a PC or Mac...

I spend 5 years mixing with digital mixers by Roland, Behringer (mostly the X32 in different versions), Midas (M32), ... Each of them had its own pros and cons.

Later on, I had the opportunity to mix using a Soundcraft Expression 32 and really loves its preamps and summing (which was not the case with the X32), and I also enjoyed the Soundcraft's ergonomics (alike the Roland models by the way). The only cons were the absence of a small screen for each channel, the lack of a USB connection...

After a quick research on the web, I came across the Soundcraft Impact, which featured all that the Expression was missing -in my eyes at least-

I was also lucky to be asked to mix at a music festival, with 13 bands in a row to be mixed within 13 hours using this console while multitrack-recording the entire festival...

So I immediately embraced the challenge, worked the manual and got my hands on the table on the evening before the festival was to start. I quickly downloaded Reaper (which I didn't know at all...), tried and tested everything and on the following day I was ready for the mixing marathon

And 13 hours later, my decision to buy this mixer was made.

The preamps let you get them into the red, and in a pleasant-sounding manner.
The high-pass filter available in the preamp section works with no issue whatsoever.

The Gate section is VERY thorough: it features a "high-pass" and a "low-pass" knob with Side Chain mode, allowing turning it into a de-esser which I found quite impressive... Otherwise, it also works well as a "standard" gate

There are also LEDs to show the Gate's state...

The (DBX) Comp section is also very thorough, but remains "classic". Still, the GR features LEDs. All settings have their own dedicated knob...

The EQ section is also VERY thorough with a full-configurable 4-band and all knobs on the front - great job! When you push the low or high band's Q, the band commutes to Shelf mode

The "Output" section features pan setting and a delay that can be applied compared with the input signal (apparently designed to sort some front-of-house issues...).

Each of the small screens indicates the input level, compression level, channel name and Gate's state.

Please note that the mixer's touchscreen doesn't offer a lot of features (EQ display is rather basic, and there is no Gate or Comp display

). I like this, as it forces you to work with your ears - not your eyes

Hence, the analog-feeling I was talking about

However, it lacks a page which would display the levels for all of the mixer's inputs and outputs.

Please also note that the mixer can of course be remote-controlled using an iPad and dedicated router. Using this option, you get that very modern and complete display ala X32... So, getting a tablet besides the table is definitely a possibility (and one I intend to try out very soon...).

So, the mixer comes with the MADI and USB card. So, you can play AND record in the same time towards a PC or Mac (which I did in a live situation): benefiting from a two-way flow from and to a DAW is something very appreciable!!
So, it's perfect for live.

In my studio, I have a PCIe SSL MX4 card with an available MADI connector, so it's perfect!!! I will be able to add this mixer to my studio setup, as I'll use it for all my headphone monitoring duties.

The monitor outs 9 to 14 can be switched to stereo, and with a total 16 XLR outs on the mixer it allows to send 8 different and independent mixes to the headphones (and of course the same in live situations... ).

Other than that, the mixer originally features 14 mono aux and 4 send aux to the mixer's internal FX.
The effects are Lexicon-made effects from the MX400 series, with mono sends and stereo returns to the dedicated 4 stereo tracks...
After thoroughly exploring them, I can say that I really like the effects which are offered here. beautiful reverbs and delays, as well as more special stuff such as a voice doubler (pitch on one side and reversed detuner on the other), choruses, flangers and so on

Regarding the number of channels, the master manages a total 40 channel (32 XLR, MADI or USB ins + the four stereo FX returns), plus 14 aux, 4 sends and matrixes...
Each of these channels features the aforementioned gate, comp and EQ sections.

Plus, each of the mixer's outputs (aux, master and matrixes) features an additional 32-band EQ...

The mixer also includes a good monitoring section, a headphone out located under the mixer...

Please note that (compared with the Roland models) it features 32 XLR ins in front (including 8 XLR/jack combos), 16 XLR outs, USB and MADI inputs and outputs as well as HQNet connectors (compatible with Soundcraft STUDER boxes), a free slot for a second (optional) card (plenty of card models are compatible with this mixer!! ), the (integrated) power supply. No MIDI. So, this mixer can't be used as a control surface in a studio.

The integrated software is rather ugly, but very easy to use. However, I advise those who like the M32 or X32's beautiful screens to get a Wi-Fi router and an iPad.

Each fader features an underneath band-shaped light. This lit ban changes color with the function attributed to the fades (mono mic in, stereo in, matrix, aux, 32EQ...), and this is anything but a gadget when you have to take quick decision... Let alone that sexy look it provides to the mixer as a whole

The upper front features two USB sockets: one for the USB lamp, the other one to update the mixer's firmware or save a "Show" - as they call it...

Otherwise, this Soundcraft sounds very very good, the different - Gate Comp EQ- sections are very useful, the preamps take in very well, the summing is flawless and there are extreme freqs in both the highs and lows (something the X32 has more problems to deliver).

I'm going to add a SansAmp pedal and a 1176 to go towards a more rocking sound, and perhaps a PCM 90 for big and thick reverb sounds (as the mixer's internal delays and short reverbs are already perfect!!! ).

I'm about to start a series of shows with an electro-pop band during which I'll have their Mac with me in the control room, and I'll split their mix all across the console mixing it with stage mics. I can't wait to be there, future 'in residence' studio sessions look promising, this feature is really great!!!

So, what do I like least in it?? Perhaps the lack of possibility to use an Android tablet to monitor some necessary data. Their partnership with Apple is somewhat burdensome...
Except for this, that' a perfect score!