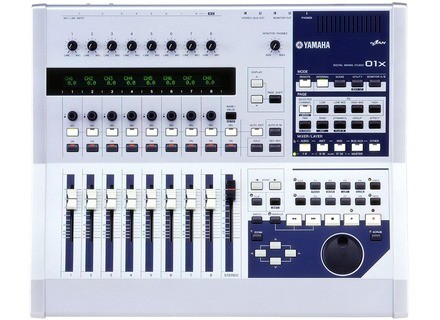 View other reviews for this product:
Everything has been said about the characteristics.

Unfortunately it is not rack and nothing is planned for STD. Two strips must be tinkering with dimensions 19 "if you want to place it in a rack but it is not obvious.
Too bad.
Another black spot, it lacks a truly independent monitor output, the possibility of routing at this level are candidly "cheap".

Obviously some will have noted the absence of 6 XLR input and 48V power supply to all .... No doubt an economy on the price.

Good reliable connections over the lack of XLR and especially rackabilité, it&#39;s -3.

The rest of the features for the price it&#39;s a no-fault or almost so say 6.

The configuration is simple for anyone who knows how to use .... but anyway it is still tedious and time-set views the possibilities of the craft and the many menus to manage (Patch Input / Output Patch / Effects / more Dyn and the EQ for each channel and departures auciliaires)
Say it is not a console for anyone who just wants to push the fader, put a little EQ and have sound .... or anyone who wants to constantly edit the current setting of the concert. Live it would require almost an engineer appointed as a great .... Only the number of channels changes, and even 24 is not bad turn.

So for me the console is not a problem, say 9 / 10 but instead the book is really wrong. Lots of things are not explicit in it and it takes practice to get by.
So 7 / 10 because of the manual

So I routed the bus monitor to the i88x (Ana outputs 1 & 2) and then I feed my headphone amp as well: His superb.

Conclusion: The analog output -10 dBV to 01x are rotten !!!!!!!
(This is not the case of phones out, rather as honest as power)
Note: During all the years I did not serve the analog outputs of the 01x I was able to measure their level of mediocrity (I attack the facade SPDIF 24-bit 48 kHz through a digital processor ...)


It is transparent, yes. Paint the tracks and it does not present.
The preamps are blah and if possible to be reserved for instruments or line level microphones with high levels (near battery). After 14 hours on the gain of breath sounds and is more common. Cup and the sound becomes fuzzy. Do not expect to get a condenser microphone
By winning against the mini (line) inputs behave like simple line level converters AN, and converters are just totally honest.
Synths on the fact that perfectly.
HiZ input for guitar or bass did not convince me because the preamp was the very breath tjs matched in impedance and a low-gain passive it requires .....
I go low in the 8 line level but after a (good) preamp out ...

Finally, the analog outputs -10 dB unbalanced frankly sucks. In addition the quality is not strange, especially on the output monitor.
The headphone output is not great either.
However the SPDIF output is of course totally transparent and dynamic ...
So if you have a facade treatment (filter and EQ) in 24-bit digital input you know what you have to do.

The EQ and effects are truly effective and transparent but the graphics are poorly done for the 01x editor. It "sees" what is wrong in the settings and it takes about his ears as his eyes. As usual course, but this is misleading.

Well let&#39;s say 6 / 10 because of the quality preamps and analog outputs

The analog outputs are really pro i88x (+4 dB and a real sound ...) and thus fill the gap in the 01x.
Preamp inputs of i88x are also really incomparable with the preamp of 01x.

Yes I know it is considered not i88x here but still it means that we can aquérir a 01x without worrying about some of the missing, provided they add a i88x.
It&#39;s rare enough to be reported.

There is to my knowledge still is no alternative in the same box incorporating both a live digital console EQ / DYN by two more multi effects, a control surface for DAW, and finally a "sound card" multi input / output.

The ability to use it as sound card + total recall console for live multitrack recording in the PC group (pre EQ / DYN or post EQ / DYN or post fader to choose from!) While leaving the mix of front (up to 24 channels) is really great.

The idea of ​​MLAN is excellent for the home studio and live .. But unfortunately the difficulty of apprehension for the novice denied a deserved success of Yamaha.
And we had a private O2x "pro" long hoped.

I would do with closed eyes the same choice as in 2004 I wondered if others would not do better in the genre, but this is good, I know.

Some are better preamp, others converters, but none has everything under one roof as does Yamaha.

So my overall opinion is excellent despite the flaws mentioned above. 9 / 10.
See the source
Did you find this review helpful?yesno
Cookies help us improve performance, enhance user experience and deliver our services. By using our services, you agree to our use of cookies. Find out more.