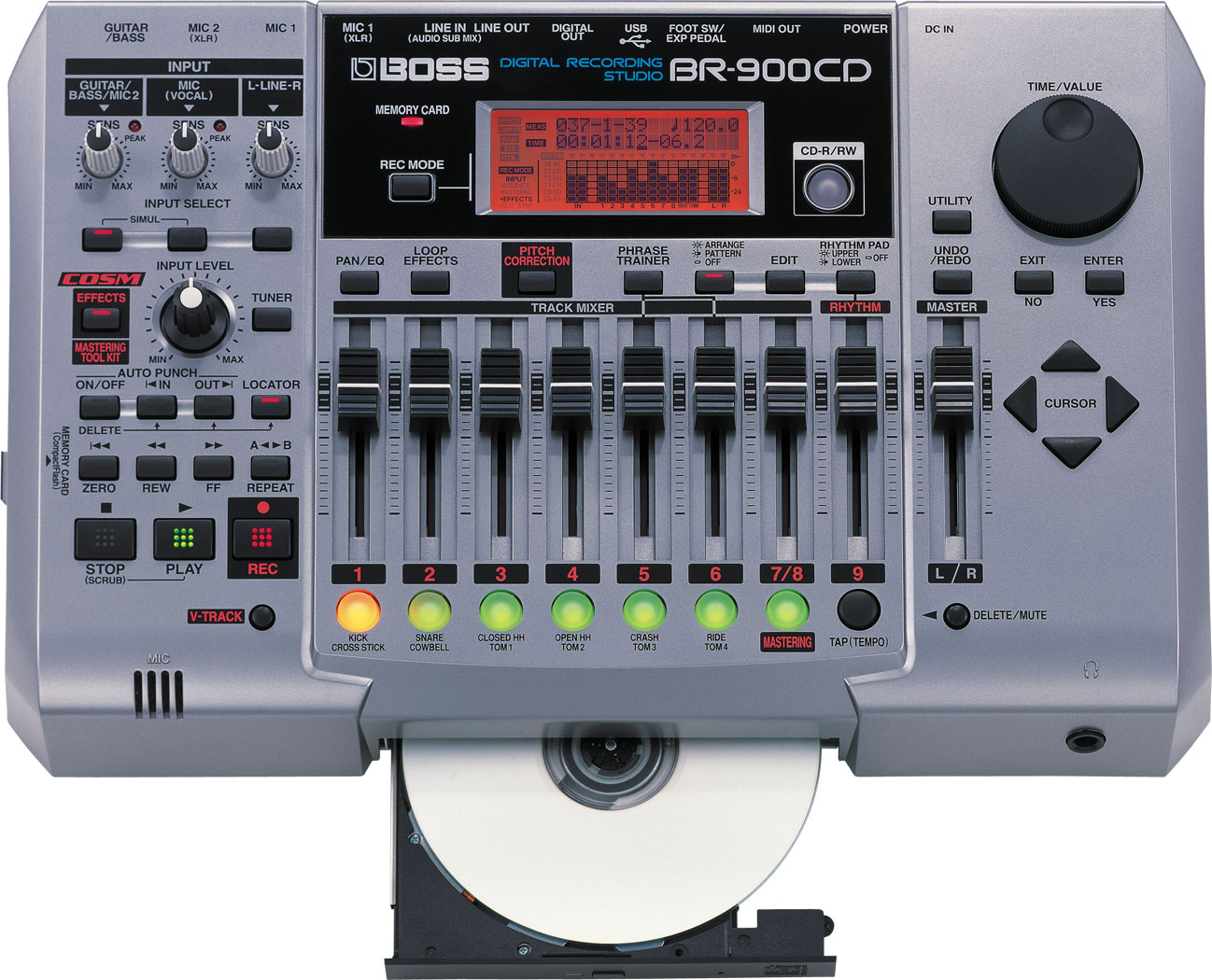 Digital Multrack-studio from Boss belonging to the BR series.

View other reviews for this product:
meva

It's very easy to use. You push a track, choose the input, mic,line or jack, set the track's level, press Rec and you're done.
Very comprehensive manual.
It's not complicated. You even have the possibility to move the tracks from a time code to another one using the in and out points, or seconds or tens of a second. All that is done pretty quick, there's not much of a learning curve.

There are even customizable beats.


I must say, however, that it took me quite a long time to get the right volume levels, because the VU-meter is not very precise. In fact, you can let it peak without risking any distortion, which is what you have to do for the final result to have a high-enough volume.

Lots of effects for guitar, bass, vocals and piano. Lots of effects in general. Besides reverb, chorus and delay. To cut it short, it features all you need.

In terms of the sound alone, it's quite all right. With a good mix, with the right volumes and pans, you can make good quality songs. I must admit that I can already see its limitations. It's semi-pro, I think the songs sound a bit "tight," with a slight lack of dynamism, even if you listen to them on headphones. But it also seems logical, considering it works as an amp for guitar, piano, vocals, so it's inevitable. You might get a truly optimal sound using external preamps connected to the line inputs.

I've been using it since I first started writing songs, back in 2005. I never did switch to computer music because this is precisely the kind of tool that allows you to do without a computer. The sound might not be the best, but it depends on what you connect it to, and since you can plug anything to it...

For those who don't know, the number of tracks is unlimited. You can record 8 tracks, bounce them, record 8 more tracks and bounce them with the ones you had already bounced before, etc. It's great.

It's portable, with batteries, it's solid, I have never had a technical issue.

It makes recording easier.. You can easily find memory cards in any shop. I recently connected a mixer to it because I think one of its limitations is that it can only amplify one instrument at a time (besides guitar and vocals). This means you can't play simultaneously with a drum machine and synth going into the boss. It's natural, but it annoyed me, now it's cool.

One last thing, the CD reader/burner is very nice but, in the end, it's faster to transfer it all to a computer, so even if it's a great value for money (it allows you to mix and finalize a song at a very affordable price), there might be another model in the series without CD reader and, thus, cheaper.

I always use it. Without my Boss, I wouldn't be able to record anything. It's the key element in my studio!
00