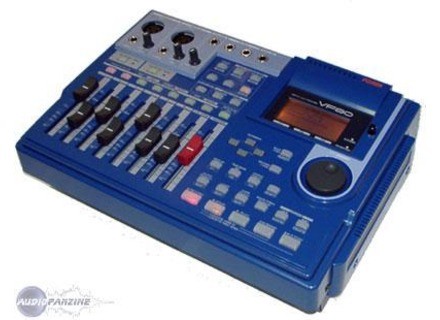 View other reviews for this product:
Purchased through Musician's Friend for home studio use. Price paid: $699.99 US

Ease of use. Durability.

Only one FX buss. No compression on tracking. The built-in mic pre-amp bites. Only 6 tracks for tracking. One two tracks can be recorded at a time.

The construction is rugged. Other reviews have noted how heavy this unit is in comparison to comparable units by Zoom and Boss. This is due to Fostex, having built equipment for home project studios for over 25 years, using a metal chassis rather than bakelite or thermoplastic.
Although others have commented on the buttons collapsing, when one visits forums such as homerecording.com, the comments on this problem are not directed to the VF-80, but the lighterweight MR-8.
Regardless, this is not a significant problem. The buttons respond to a light touch and do not require pounding keys like an old cassette deck.

While it is true that this is not a true 8-track unless one mixes and masters to an outboard digital unit such as an ADAT unit or a standalone CD recording deck, for a beginner in home recording who is not planning on recording a full band, it is probably the best on the market. In the Fostex forum at homerecording.com, others have commented that the learning curve on this unit is not as steep as for comparable Boss or Zoom units. I have found for the most part that operation is very intuitive--but I keep the owner's manual handy just in case I get into a jam.
While the FX are limited, with some experimentation in the Mixing and Mastering stages, one can come up with some truly interesting results. I managed to duplicate a vintage early 50s Sun studio sound.
As noted, the mic pre-amps are not very good. An outboard pre-amp or mixer is almost mandatory.

All in all, this is a fine piece of equipment, but we must remember, great music is not dependent on great equipment but on talent, heart, soul, and hard work. Having said that, I'll get off my soap box and close for now.