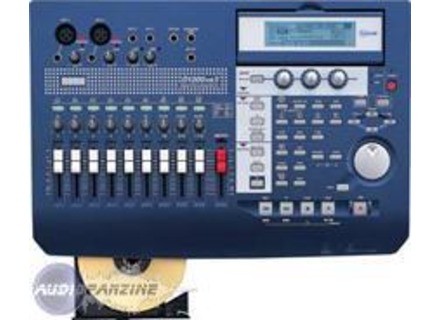 View other reviews for this product:
It all started with borrowing my dad's guitar when I was 15 and went rapidly downhill from there... Before too long I was playing in bands at school, writing songs in my bedroom, and generally not paying attention to much else.

My teachers thought I'd grow out of it, but 15 years later, I'm still playing teaching, recording and playing music, and haven't got a proper job.

Mainly I play folk and acoustic styles, but my recording work has covered opera, hip-hop, metal and pretty much everything in between.

I'd been looking for something fairly cheap and simple I could use for home or location multi-track recording, and transfer data to my studio computer for editing and mixing.

I considered various options, and this ticked pretty much all the boxes, without being too big & expensive, or cheap and nasty. I got it second-hand on Ebay for £200, which was a bargain.

The features that sold it to me:

* ability to export WAV files via CD or USB.

It also has a "modelling mode" (controlled via 3 knobs) and loads of FX programmes, which are all eminently usable.

Other than that, it's very neat and compact (fits in a shoulder bag) and a nice blue colour.

There's not much to dislike about it. The only downside of something this small is the screen display is tiny, amazing what they do get into it, but there's a lot of menus and button pushing involved.

While I rarely use more than 8 tracks, it's worth noting that tracks 7-12 are stereo paired tracks, so really it's a 9-track machine (though of course you have something like 96 virtual tracks so nothing is lost if you have to "bounce")

One other thing is once you're in the "modelling mode", it's hard to get out again!

It's pretty well constructed. I wouldn't want to put it to the test by throwing it down the stairs. The buttons feel a little flimsy, but I'm sure it will last a while yet (as long as I don't press the undo button too many times)

Sound quality is excellent, what you put in, you get out again, I wouldn't compare the mic preamps to dedicated outboard gear, but they do the job. The onboard FX give you plenty of options for polishing up the sound.

I love my Korg D1200 mk ii! It's dinky, and easy to use, but it lets me make quality recordings anywhere there's mains electricity.