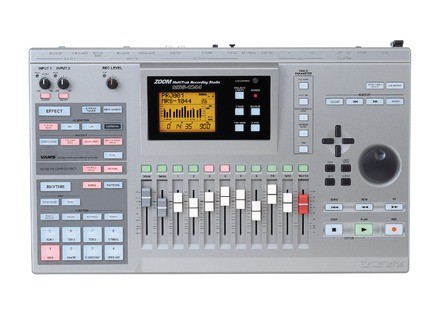 MRS-1044, Digital Multrack-studio from Zoom in the MRS series.

View other reviews for this product:
Good is an 8-track recorder numrique (6monos and 2streo), also includes two tracks spares for programmed drums and bass / rhythm box.
Mine is a 2nd generation 1044 version1 (ie with 20G hard disk instead of 15G) with the update to version 2 via USB port (optional)
you can record two tracks simultanment, besides the rear connections are compltes for any type of.
the better to see on their website: zoom.co.jp

Question use everything is simple, there are not too many buttons everywhere ... on the other hand sometimes you know the sub-menus. But hey nothing complicated with the manual if you are really blocked.
For my part I bought it and started recording the first day c'tait so simple.
APRS prcis more for stuff (like ping-pong, import / export tracks, automation ...) I read the manual (in English it is more clear explanation) and it trs easy.

For I t sounds pretty bluff departure. Later I realized the small "default". Finally it is the my ear that comes into play and gots and colors ...
Scratch presets are good but when compared to other amp simulators (POD or SansAmp kind) are not picture it is deu. I find that a lack of punch especially distortion. ons and a clear will. Finally, even when zoom is what.
For mastering effects not bad and also mic effects: I recorded a BMD that sounds not too bad. sr can be good or even its presets and the choice is vast ....

I use it since its release in late 2001. I sold a year APRS (need as ...) and have purchased another. If I ratchet it is because I thought the best c'tais qualitprix / use.
I have tried other apps and even on the computers and still the silent zoom n 1.
What I like least is the part that I find bote pace not good programming. and then the sounds are good but limited (one crash, a snare, a bass drum etc ... per set) and then sync via MIDI is not great I think.
Since one year I have the USB interface and I m'clate. I combine computer / zoom and a full suite of open channels (eg put the drum track on computer programs and playing with a soundfount).
I can not say I would do it again because it's already done. And if I have to sell it again I would resume the zoom but this time a version above (more tracks, DD ...)
See the source
Did you find this review helpful?yesno
Cookies help us improve performance, enhance user experience and deliver our services. By using our services, you agree to our use of cookies. Find out more.