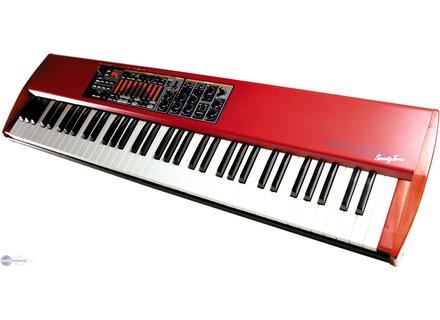 waterfall keyboard type suitable for the organ. used without frustration for the Wurlitzer and Rhodes. a bit light for the latter compared to the original but it's more than playable! I think the keyboard (and the instrument overall) inspires confidence in strength. I am not a classical pianist at the base so I can not power some ds fingers, so it's fine with me, including the rhodes.

Ease up: almost "one button = one function". selectors of his / or modulation effects are linear, from the 1st to 6th, you must bind the second, third etc ... 6 small buttons would have been more convenient. it is the only small downside, Globle is not too bothersome, there are ways in addition to program their own configurations (48 presets)

Drawbar organ super practical (not "jump" from one config to another then when you touch the zippers). in addition to the presets, it is possible to recall the organ drawbars of standard configs 9 and 9 to set users and more

the split point was previously fixed, since the recent OS2.2 (downloadable from the site of keyboard), it is configurable. excellent.

manual very clear (to be said that the keyboard does not need a bible to be included). bonus, a history of running emulated keyboards. respect

The sound is happiness! not only mine but also that of my buddies on stage (yes)
The organ is fantastic. Leslie is the HUGE (nothing to do with that of the Roland VK for my taste), the organ can do as well as cat roaring lion (effective overdrive!)

rhodes, clavinet and wurli fantastic! CP80 as well. but I know at least at the base. lack may be a little sharp (like the original?) (but adjustable equalizer)

using acoustic piano, but not its function. but I use it and it is not so ridiculous for games percussive (rock or blues). He helps out well (just NE and hop, we play!)

VINTAGE effects at will. no reverb but ultimately it's no big deal (in the studio, we put an insert on stage, there is the console or is not required.

expression pedal controls the volume of the organ and wah wah automatically on keyboards. top. attention, yamaha pedals do not work well. you need a roland (Roland took a Master on the advice of Appogiator is ok. Korg remains, but since there are Yamaha Korg = risk)

The Nord Electro is a REAL instrument. GRAIN has an undeniable. Then we like it or not, or as we like to play on a Telecaster.

If you are looking for an organ / rhodes / wurli ... you have the choice between him and the VR760. it is not in the same category as Promega3, which has a piano touch and also in his vocation to emulate the acoustic piano.

its only flaw is that it is not multitimbral (so no way to have overlay or split the organ on the one hand and a rhodes wurli or the other). if you really want to have this opportunity, we must wait for the Nord Stage (88-key piano, but then the organ hum, except if they come in 76 notes later) or look at the Roland VR760 (larger too. .. but very good touch waterfall). In both cases, it takes about 1000 euros more ... and for the Roland, even if the organ is very good, the leslie is less efficient and rhodes and wurli are much less realistic (the same wurli is bad enough ...)

Northern Electric is in my view unbeatable in terms of quality / price / weight. it's a pleasure machine-effectiveness without compromise. To determine whether expensive or not, we must look over its direct competitors and know what you want to be music. it is a long-term investment, buying a "substantive". at least you buy something that you use 100% (this is not the case of workstation tjs)

when you love these types of sounds, including the organ, moving from one workstation to this type of craft is really enjoyable and it takes the plunge!

I have long revolved around, stores tested time and again, and the other "clones hammond" ... and finally I have taken the plunge three weeks ago. I will update but for now it's really buying that I am not about to miss!
See the source
Did you find this review helpful?yesno
Cookies help us improve performance, enhance user experience and deliver our services. By using our services, you agree to our use of cookies. Find out more.