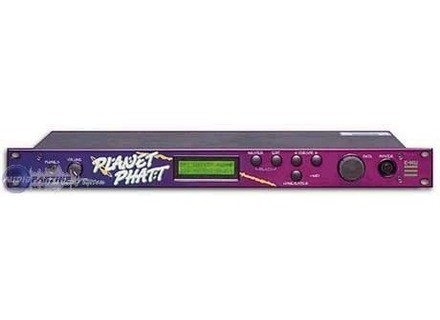 View other reviews for this product:
In the family of sound modules E-mu, whether to choose five modules from the range and God knows it is great for the PlanetPhatt would be part of the list. At the time attacked the E-mu sound modules market with dedicated Audity2000 the OrbitV2, Carnival and the Planet Phatt. Both Proteus Orchestral and Morpheus have met with worldwide success, it was not to rest on its laurels.

But the Planet Phatt banged over the lot. It includes the essential sounds of Disco, Funk, RnB, Hip Hop, Rap, Acid Jazz, Soul, groove throughout with plans to introduce today in Rock scuds or industrial. It's a Swiss Army knife that opens cans ideas as preserves. Huge.

Simple as all the modules E-MU (see further comments below).
In a simple as we would like sometimes fronts a little loaded as Roland (ref to the JV or XV series) to have a button> A menu. Here too, it scrolls. Good

Thus editing sounds too slow for an Alpha Dial and two sliders to full function and filters is a bit lighter but if you have a MIDI remote control (whatever the brand) or E Launch Pad -mu (remote native) that's it.

As for the manual. at the time it is not c. .. r
The French version is correct to fly over the Planet Phatt, the Owners Manual in English can understand some functions a little neglected by the French.

Side SONS::: it's huge. In the studio, we put the volume of P-Phatt to 3 / 4 and I was wondering what level would be obtained on the console (02R). He attacked hard. No problem of dynamic bandwidth and beach were so broad and dynamic that could play mono or stereo effects without losing a% of fishing.

640 presets the counter 17 that match the type of 6-pole resonant filters (32 digital). Each sound can be used Beat Mode (interactive programming of Groove responding to 100 beats (rhythmic beats) in loops and 28 tracks prerecorded).
The Beat Mode also offers 100 rhythmic patterns (independent of the Beats as a measure = 4) and its 28 songs still programmed but Programmable.

And the virtuoso Rap and Jam, E-mu has even introduced the function of Scratch (scratch that allows each separate sound and the beats). I have not tried Multimbral preset but it sends.
This feature was developed with the Beat Mode to give later on Munger's Beat samplers Emu E-Series Ultra.

It's Phatt ... Loud and Strong For Every kind people! It's a Fuckin 'engine, For Fuckin' Who whant musicians to play and Produce a Funckin'music.
Is There Somebody Here ?!??? YEEAAAH!

What Else ...
See the source
Did you find this review helpful?yesno
Cookies help us improve performance, enhance user experience and deliver our services. By using our services, you agree to our use of cookies. Find out more.