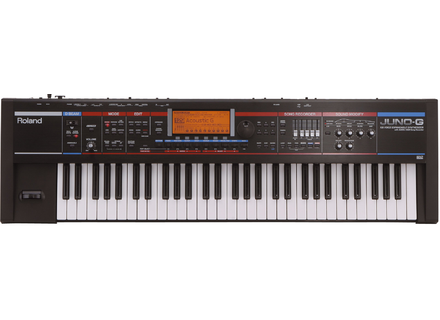 JUNO-G, Digital Synth from Roland in the Juno series.

View other reviews for this product:
Visit the Roland ....
There are 1260 ROM waveforms
(This figure is not indicated on the site)

I had a Korg M1 12 years ago and since I did not touch one
keyboard while forcing the possibilities have nothing to do.
Sounds are easily accessible (sorting categories) but
the edition, it needs to be faire.Le edition software is handy.
The manual (books in English and in French ...) is clear but must be handled, there is no miracle before
make the most a few Sundays cloister the house without it.

The squenceur very easy despite the small screen (compared to screens
TritonExt and FantomX) but I use that comes with SonarLe.

The edition of combinations (performance) is very easy.

The sounds are varied (classic styles, modern appliances, sound effects and bizar phew) with good acoustic and ethnic instrumentals.
It is true that some patches are totally unnecessary and Incas in a component (such as "autotrance" "groove007" or robot voice "try this" etc ...)
Another criticism of the drumskits (there are certainly a lot but sometimes unnecessary noises ..)
But there are 768 patches with 256 editable is more than enough to customize any a.

The effects are numerous and give a real dimension to sounds,
multitimbral mode but can be used as 3 insert effects (which is not bad compared to the TR or X50).
The controller is DBeam funny but I can not find it indispensable. (One would be more useful after touch)

Note the Possibility of importing samples to create patches via the memory card (not included) and therefore the possibility to sample ....!
But I have yet to try everything audio.
It is mandatory to add RAM, 4MB (23secondes of registered) is not much.

After one week of use, I'm glad trs!
Varis and sounds good, easy to use, provided the soft drinks are a real plus.
His report is unbeatable qualitprix (compared to TR, X50 and MO6).
I manipulbr />-X and the TR-50 (which sound really good but there are fewer features)
Motif6es it (but it is not comparable)
-Juno-d and (I immediately remove from the list after the hearing)
Later I would take probably an SRX (world collection), but used.
Assets:
Engine noise-fantom
Money
Using easy-base
Sufficiently large-screen end
-Quality of general synthbr />-variety of sounds
-Edition patch and multitimbral mode possible via PC
Noon-USB link
-Sequencer succeeded, and software "Sonar The" provided
-poids/encombrement
-4 Output jack

Cons:
RAM-home almost zero
Price-€ 300 extensions SRX
See the source
Did you find this review helpful?yesno
Cookies help us improve performance, enhance user experience and deliver our services. By using our services, you agree to our use of cookies. Find out more.