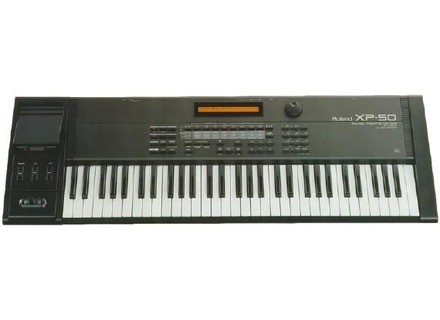 View other reviews for this product:
Synth Workstation that can not find the gal in the jungle of synths in the same catgories especially when the price (used Obviously as it no longer produced!).
The evolution of synths and computer music fact that the acquisition of a gear (Home-studio) requires a different approach than last over several decades (release date of the XP50! And even more !!!).
The strength of this synth to be as objective as possible, is a combination keyboard-sequencer (disquette!).
- The sequencer is complete and can put together easily. It can record an INTERPRETATION steals or assists Manir (quantize) up to edit the notes (microscope mode) or MIDI clock vnements clock prs and this, with a little practice, in a manner comfortable. One can start the recording of patterns and to mount this song. Obviously the work is saved on disk format or Owner &#39;Roland XP50, SMF 0 or 1 Go find a synth that makes for a price now (GRRRRRRRRRRRR )!!!!!! Forget the Real-time Phrase Sequencing for assigning patterns you do with a keyboard for your orchestration apperu rappide CHRIE !!!!!! The possibility to noon CONTRL external device is complte (Transmission rception twelve o&#39;clock, noon Through) ...
- The polyphony is sufficient, in ten years of practice I rarely t gn by 64-voice polyphony, except accidentally by RPS jou two batteries I pressed pasque a button at the wrong time !!!!!!!!.
- The sounds are the sound Roland found in all branded products up slightly (JV-1080, JV-2080, Groove-box )!!!! They are widely ditable (approx. PITCH, TVA, TVF, two LFOs per patch, 4 sounds (tones) by PATCH, 10 STRUCTURES combinations of sounds (tones), by layering or VLOC sharing the keyboard .. ...).
- Asked style of music passable with XP50: style electro, ambient, Drum & Bass, Tekno, Acid-Jazz, R & B. .... All with a certain color and a little adaptation sounds. Note that the sounds can be saved on disk (I put in the DFI to find a synth of this price being the same thing (GRRRRRRRRRRRRRRR )!!!!!!!
I put 10 (in note) because this machine, I think is an example of intgration because with it alone, you can make REPRESENTATIVES compltes (scnes, jazz bars, restaurants, etc. ....)

Configuration, well you have to dive a bit in the manual but everything is accessible via buttons under the screen that are organized by dj menu-submenus (well, okay there are still some sub- the screen menus accessible through the navigation m&#39;enfin ....).
In terms of paramtrage of the machine, it&#39;s the same, we must delve a little compartment in the manual but on the other, which has the MRIT of being clear and effective ... .
I note that you can enter to give diffrent fawn: either the wheel round, either by the keyboard numrique (very practical!) Or, for the blind Increase by-DECREASE keys! I say as a Paske in a state o I saw some XP50, even younger than mine (I sell for that matter) &#39;was better to purchase the expander !!!!!

- The sounds are a bit but everything is relative viellot !!!!! There&#39;s no long branch in a bar I could still hear the instrument of Grand Master Flash (80&#39

.... I still sounds like me!
- The effects section is of good quality, there are m ^ me radical effects (Distortions. ...). The possibility mode Multi-stamps is limited compare what comes out now, m&#39;enfin is not not mean that there were good things that came out on the air until then ...
- Good expressiveness (VLOC aftertouch curves VLOC ...) according to the paramtrage, it provides original things, does it still immerse themselves in the edition of the sounds (filter, ground , velocity cross fade, etc. .....), which is not the sport of the majority of those whose opinions I read GRRRRRRRRRRRRRRR !!!!!. It may also, paramtrant the modulation wheel on the vomume two tones of a pacth (or as paramtrage) RALIS a "morphing "....
Question sounds, with the purchase of some expansion cards (SR-JVxx) can cover the majority of musical styles. The XP50 can hold 4 boards.

I use it for 8 years (prs qqes days!). I am much used (scnes, studios, home studios, rpt ....).
The + is the sequencer, that can be composed with an autonomous Manir (at least for a dgrossissage composting, see ....). For sounds, I really like (the potential for the edition sounds! Tablecloths, comps, leads, low fat good, electric keyboards, piano ...).
I possd (4 5 years) the D50, D110, SY77, DX7, Korg M1, SY85 (I still have!) VK7 roland (orgues!!) And XP50, and now MC 307 (recently !!!), RM1x, Motif Rack ES and CS6R (yamaha).
I tried (as I live not far from Pigalle) many devices (synth expander).
Among the stuff I owns and proved (for I am not content to run that sounds presets), the XP50 has contributed much to my music (jazz, funk, electro mainly). My two brands are prfres Roland and Yamaha, I think they compltent well. I also second bine a DJ with a set XP50/CS6R (the fire god !!!!!! 9a-d Chire serious, high-volume !!!!!).
I think the argus is declining (the law of market forces!). However, I remind the new acqureur Machine condition given the age of synth playing for many (and maintenance !!!). But know that it&#39;s a good p. .. ain bcanne (especially the price the 550 Euros for mine!).
I spare to buy a MC50-MKII (to replace my XP50 sequencer and a MIDI controller (such EDIROL), mainly because I am guitarist and I aged and I return to my love Premire .....
I advise young keyboardist, composer and lover of synthse, thus by the time course, people want to dial in the genre Groove, R & B, tekno, dance (electro what kind ...).

Thank you, @ +
See the source
Did you find this review helpful?yesno
Cookies help us improve performance, enhance user experience and deliver our services. By using our services, you agree to our use of cookies. Find out more.