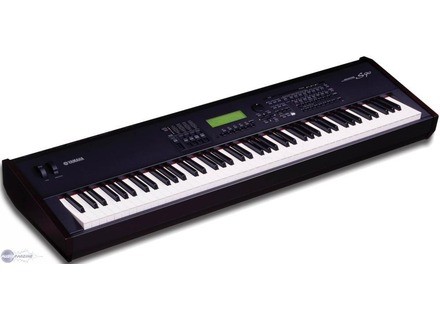 View other reviews for this product:
See below (I agree) Otherwise:

- I regret that Yamaha did not keep their intgralement Graded Hammer Action Keyboard for P90 SERIES. On the S90, the touch is the same low notes and notes between acute (Balanced Hammer = balance between bass and treble). on the other hand, it remains an effective trs mcanique hammer is a real rgal. For my part, I tried the keyboard one of the other cot. I played a SERIES of notes on a keyboard then I went directly to another keyboard to replay the same thing. In the end, feel Yamaha is the one I find most raliste as well as the high-end Triton and the Kawai MP9500. In my opinion, all three have a touch in the same "style". The S90 may be a tad more lightweight and is the only gripe that I am (no Graded Hammer). I did not touch AIM Roland which is really more "cheap". It&#39;s the same for DIFFERENT keyboards matres touch heavier than I&#39;ve experienced (and I test the feel of almost all Distribus correctly).

- No numriques outputs as standard. Map mLan CHRE yet.

- A from A / D + gain: you can connect a microphone and bnficier internal effects. Trs a good point.

- No pedals are provided. Would not provide a t luxury.

See below (I complterai later)

With regard to the sound, I would put a notice BMOL to previous ones. I use it only recently, but some points are noted:
- Regarding the "famous" piano sound on three layers, the jump between the level DIFFERENT VLOC is clearly audible. As long as you&#39;re playing fleurtant between one level and another, we might be surprised ... I do not find balance. The color in her own when she met me, it sounds more programming for me dplat.
- The fltes are really nice and practitioner. I will test out the Controller "Breathe" the above.
- The percussion are nice and some trs more exotic instruments also. For the latter, it lacks a few samples for a range INTERESTED.
- The sounds of analog synths are good, but that cost a Novation KS5 before, I did not feel the same effect "In Your Face" from analog CHARACTERISTICS ... Lacks a little size. No doubt it can catch up with S90 at the output of a device / ddi soft.
- Finally, I do not know what you think, but so many sounds on 110 MB, so do not expect to compete with multi-GB library .. It&#39;s as simple-minded comment, but hey I must say all of the same.

For me, the S90 is essentially a keyboard matre fantastic. Its functions are irrprochables. It&#39;s pure happiness. Some sounds are usable trs, but when I see that for 200 was a 290 + EAST WEST Bsendorfer Kompakt Intgr VLOC levels of 16 ... I am demanding and I look at the quality of sound in terms of "registration". I do not save the piano S90 (the 3LayerS700) on passages such as crescendo. The fltes yes on the other hand. As this is a rel pleasure of playing with the S90. This is a wonderful device, trs good quality. From a global point of view, the sounds from the Motif are good, but we must refine this view.

I am fully satisfied with my purchase and it is clear that I achter again (if still promo LOL).

How I made this choice:
I was looking for a basic keyboard touch matre nickel. The Fatar are good, but the Yamaha ct they do not compete at all. I zap M-Audio. Their 88-key agile is cheap and bad touch is equilibrated trs: a block to beginners and once pass the blockage, the race is a draft. I also zap Edirol (very good touch with synth cons, as Novation Remote - recommend to the touch synth), etc.. I still had the range of keyboards Oberheim matres. It is not and I n&#39;achte not something that I can not try. Finally, there was the Doepfer LMK2 +, but hey just for 1100 features matres keyboards (and some evolve to surcrot trs) and date dj blah, blah ... Also, I could not try it. So I orient towards pianos numriques range (eg Yamaha P90). But this kind of device (PC1X, P90, etc.)., MIDI is the fawn symbolic and no aftertouch. Right, well I still see my budget and rising up the range ... And so I get to choose or Kurzweil PC2X S90. The latter can not try that Lyon and as I did not try (because I&#39;m not going to Lyon every day LOL), well I do not achte. Kurzweil has that amliorer its distribution in France (if not nicer than Backline & Pianos Kurzweil is motivated to distribution in France unless they were not nice rpondu my mail). I t bluff by the prize promotion and the srieux the S90, I said you got all the inside of a keyboard super-Matra and respect sounds, bah it&#39;s always good to take bonus (I prcise again I was not looking for a sound module based). And as I pointed out some sounds are excellent ... I put 7 / 10 for sound, it&#39;s not for nothing ...

For résumé, which I shall take the heart: the pleasure of playing on this unit (and it makes me forget largely breaks layers ...). In short:
- To play: 10/10
- For the record: some points to watch

I put 10 because I&#39;m really in love ...
Vl ..
See the source
Did you find this review helpful?yesno
Cookies help us improve performance, enhance user experience and deliver our services. By using our services, you agree to our use of cookies. Find out more.