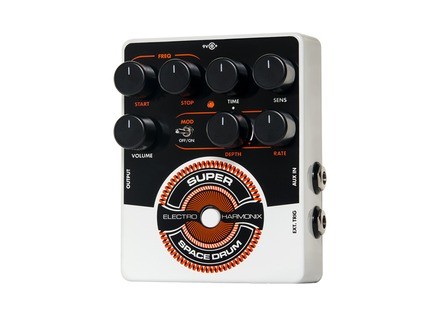 Following the announcement of the reintroduction of their Crash Pad a few months ago, EHX now announces the newest reissue in its classic analog drum synthesizer series: the Super Space Drum.

Featuring the original circuit in a modernized package, this new version is said to faithfully re-create the sounds of the original 1979 pedal. By using techniques such as modulating an oscillator followed by a gated volume amplifier, it can generate drum sounds ranging from deep kicks to high toms to sci-fi style drums.

The Super Space Drum is triggered via the on-board pushbutton, thru the output of a non-MIDI external trigger source such as electronic drum trigger pads, an electronic pulse as produced by the EHX Clockworks, a clock generator like EHX’s 8 Step Program, gate signals from synthesizers or simple clock sync signals from drum machines. The pedal also allows the user to process external sounds thru the gated amplifier via its Aux input.

The Super Space Drum is aimed at players who love analog synths and vintage sound with modern control. It is housed in a rugged die-cast chassis and comes standard with an EHX9.6DC-200 PSU - while also accepting a 9V battery.

The Super Space Drum is available now and carries a U.S. MSRP of $156.70. More details to be found at EHX's website.