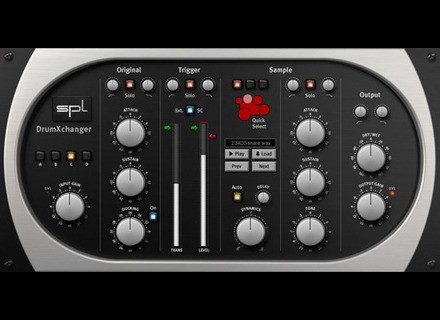 DrumXchanger is a plug-in designed to replace drum sounds in multitrack sessions irrespective of their level.

According to SPL, it works in real time and replaces samples phase-accurately in the original signal.

The samples can be mixed with the original sound and there is also a ducking function available, which only reduces the level of the original drum hit itself without affecting the ambience around it.

Besides the basic functions to process the original and sample signals, DrumXchanger includes two Transient Designer processors, as well as high-pass and low-pass filters for the original, sampled and output signals. All samples can be pitch-shifted one octave above or below in real time, while a delay control is designed to allow precise sample replacement.

SPL included a basic library with 24 bit/96 kHz samples. The library, created with SPL's preamps and processors, includes three drum kits with one snare, one bass drum and four toms each. Every multisample is made up of up to 80 sounds in sixteen dynamic levels and five variations.

Furthermore, users have the possibility to load their own WAV samples; the creation and import of multisamples, as well as the implementation of MIDI (In/Out) capabilities, are in the planning.

Pricing & Availability
DrumXchanger will be available for a suggested retail price of $449 USD (299 EUR), excl. VAT. The native version includes RTAS, VST and AU support for Mac and PC. As part of the product launch campaign, SPL is planning to offer some special deals, which include discounts to owners of the Transient Designer plug-in.

The DrumXchanger beta version will be presented at the Musikmesse in Frankfurt from the 24th to the 27th of March, 2010. Release of the final version will be announced at the show. You can find the SPL stand (B82) in Hall 5.1