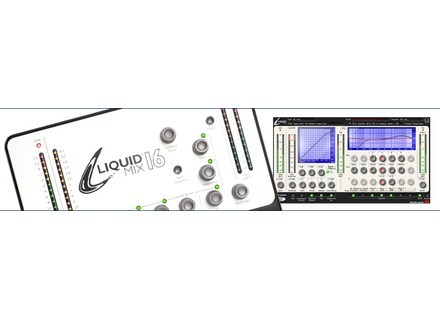 Liquid Mix 16, DSP Board from Focusrite in the Liquid series.

Focusrite says "Combining the same pool of classic EQ and Compressor emulations with a killer control surface, Liquid Mix 16 brings the sound of the priceless and the historically significant, within reach of even the most modest studio owner"

According to Focusrite, each of the sixteen mono channels (or eight stereo channels) provides Compressor and EQ emulations selectable from a huge pool of high- quality vintage and modern day classics. Forty Compressors and twenty EQs are available straight out of the box, with some additional emulations already online, available for free. As with Liquid Mix, a hybrid seven-band ‘super EQ’ is available in every instance, built out of separate classic EQ sections. Each channel appears as a separate VST/AU/RTAS effect within the sequencer and will work within all major sequencers, including Pro Tools. Liquid Mix 16 launches with Liquid Mix v2.2 software, ensuring compatibility across all major platforms, for both Mac and PC, and including the latest side- chain processing options.
The same optional expansion card will be available for both Liquid Mix and Liquid Mix 16. With Liquid Mix 16, the card allows users to increase the number of available channels at 48kHz from 16 to 24 (sold separately). Installed in the original Liquid Mix, the card enables additional channels at higher frequencies up to 192kHz. Liquid Mix uses the same patented Dynamic Convolution process as Focusrite’s other Liquid products. Unlike standard convolution techniques, Dynamic Convolution utilizes processing power to sample the effect of a classic processor on a series of audio pulses, at many different gain settings and frequencies. All this processing is done using onboard DSP, so the processing has a relatively low effect on your computer’s own CPU, (variable subject to the sequencer used). Liquid Mix’s DSP is housed within a desktop control solution and connects to the computer via Firewire, also providing bus-powering. The physical metering, and most rotary controls and buttons from the original Liquid Mix are provided here.
You can choose to control each channel either from the desktop control unit or an alternative controller, or from within the sequencer using the same simple Liquid Mix GUI, which functions exactly like a plug-in.