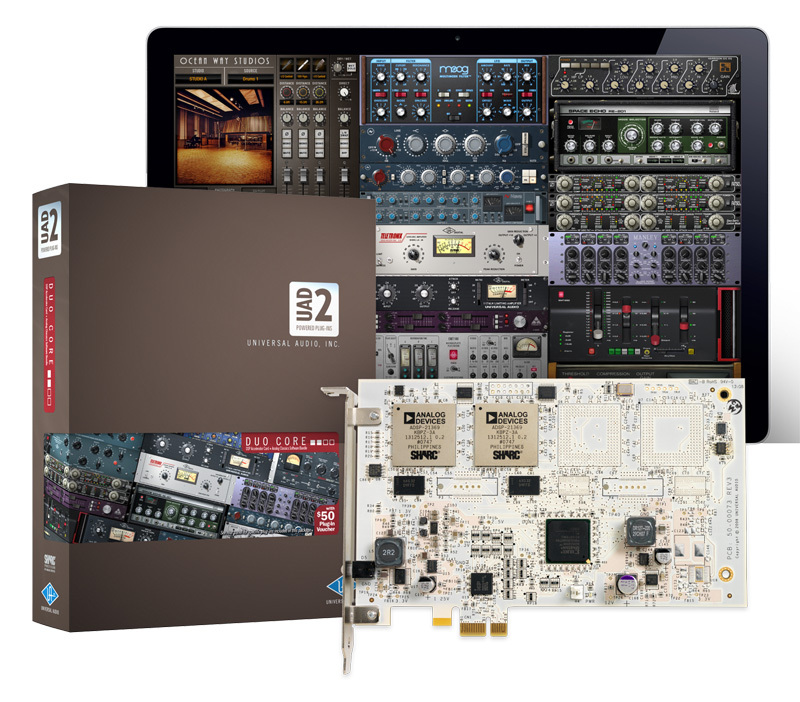 Universal Audio continues its arms race against other DSP card manufacturers, like TC Electronic (PowerCore) and SSL (Duende), by releasing the UAD-2, which comes in three models that dwarf the original in power. We tested the most powerful of all: the UAD-2 Quad.

In the world of computing, multicore processors and multithreading are booming industries. Manufacturers have realized that the future of our dear microprocessors will no longer be in increasing frequency, but in multiplying cores and/or processors. Universal Audio has understood the lesson and offers its DSP card in three models: the first, known as Solo, has, like its predecessor, one processor, the second, Duo, features 2, and the third, Quad, has no less than 4 processors! Knowing that the new processor is, according to the manufacturer, 2.5 times faster than the UAD-1, the Quad is therefore 10 times (2.5 × 4 processors) faster than its predecessor! The first UAD suddenly looks old. If you add to this the ability to chain together up to 4 UAD-2 cards in the same system (40 times the power of the original UAD), you start to grasp the enormous power potential of these cards.

Out of the box

As you take the card out of the box, you see the first new feature: the UAD now uses a 1x PCI Express bus, faster than the old PCI. You should definitely check to see if your motherboard has an available bus. Note that the card is also compatible with PCI Express 16x, which is normally reserved for video cards. It was on the latter that the card was tested by yours truly, the only available 1x PCIe bus was already being used by an RME Multiface …

Once the card is inserted into an appropriate slot, you have to startup Windows and run the .exe found on the supplied CD or downloadable from their site. It’s probably better to download the latest version which includes new plug-ins (like the UAD Equalizer Harrison 32C and the UAD phase aligner Little Labs IBP) and the latest version of the driver which is more stable and RTAS compatible. Once you’ve installed everything, you have to create an account on Universal Audio’s website, download a small file to authorize plug-ins and drag it onto the UAD-2’s configuration window. It’s simple, fast and efficient. Now you can start using the card!

Let’s take a closer look at the control panel …

When you open the panel, the first thing you see is a big button that activates or deactivates all plug-ins in your UAD with just one click. This is useful for both making quick before/after comparisons, or adding/authorizing other UAD plug-ins. In addition there are two gauges that show CPU and memory usage, global or individual, for each of your UAD cards (if you have several), which is convenient for monitoring your resource levels. There’s a “DSP” meter for the processor, a “program” meter that shows how much program memory is in use by all plug-ins of the UAD-2, and a “memory” meter that shows the percentage of memory being used by echo, delay, and reverb plug-ins . It should be noted that disabling these spatialization plug-ins will not reduce memory usage. They stay loaded in order not to cut the reverb tails or long delays.

After that there’s the list of installed and authorized plug-ins, with the possibility of activating a demo version. This is practical for testing stuff before you buy. It’s also possible to assign each plug-in to a specific UAD card (if you have more than one). On the configuration page, you can limit the burden of the DSP to a certain percentage in order to avoid dropouts and other crashes when many plug-ins are enabled.

The LoadLock DSP option lets you reserve the maximum DSP load required for each plug-in: some plug-ins have features that can be turned off (the EQ of a channel strip for example) to reduce the load. The DSP LoadLock ensures that there will be enough DSP resources if all features are turned on later if necessary. Therefore, the DSP LoadLock should be turned off only when the user lacks resources.

The Extra Buffering Option makes UAD-2 compatible with hosts such as Sony Vegas, Acid, Soundforge and Sonar. For others, it is advisable to disable this option.

Lastly, it is possible to choose the type of control knobs that will be used for virtual plug-ins, according to taste. Either linear (vertical or horizontal movement of the mouse), circular (which allows you to click directly on the knob and rotate) or relative circular (similar to circular movement but the knob doesn’t jump to the mouse position when clicked, instead the knob value is modified relative to its original value).

Tested in Cubase SX3; UAD plug-ins start up like other classic plug-ins, so the user won’t have to change his habits. In addition to the usual load and save presets, each plug-in has a “Live Track” mode which bypasses the buffer of your sound card, thereby reducing the latency of the effect to a minimum. This feature could be used in live situations but it does significantly increase the CPU usage of your computer. Plus, even if only UAD’s effects are used during your session, the sequencer CPU meter will still increase anyway. This is because your computer’s processor has to manage data transfers and other transactions. This is true for all DSP cards.

First piece of good news: all plug-in parameters for every plug-in are automatable and synchronization of temporal effects with the tempo of the host program is easy.

In terms of plug-ins, strictly speaking, you have the same choice as one did among the high quality plug-ins for the UAD-1. There are several types of bundles for every budget: from the basic bundle with UA 1176SE Compressor/Limiter, Pultec EQP-1A Program Equalizer, RealVerb Pro Room Modeler, and CS-1 Channel Strip, which is already a good beginning, to the Omni Pack which includes all plug-ins (34!). Remember that it’s possible to keep your old UAD-1 card in addition to the new UAD-2 to add their power together: nice!

To see what the card’s capable of, we tested it on a Cubase session. The PC used was an Intel Core 2 Duo 2.4 GHz with 2 GB of RAM, sampling frequency was set to 88.2 kHz/24 bits. Added as inserts on the different tracks were: 16 CS-1 plug-ins (channel strip), 8 Fairchild 670, 1 Precision Multiband, and 2 Realverb Pro and 2 Plate 140 in aux. Latency was 320 samples (approximately 6 ms), the UAD-2 Quad’s meter was at 98%, the program’s meter at 37% and the memory meter at 18%. When we looked at the performance window of Cubase, we saw that the computer’s CPU load was still around 55%. This was mainly due to the low latency, because when we increased it to 93 ms latency, the CPU meter fell to 5%. So it’s better to avoid reducing latency too much while mixing, especially since there’s really no need for 3 ms of latency when you mix, and your processor can become strained if it’s not very powerful.

The test was therefore very satisfying, knowing that for those who work in 44.1 kHz (there are many of us), you can easily multiply the number of simultaneous plug-ins by two! You’ll feel at ease, even with very large sessions. And in the unlikely event you are limited at one time or another, nothing prevents you from adding another UAD-2 card later on, depending on your budget of course, but such is life!

While not surprising, Universal Audio has updated its range of DSP cards with brio by largely increasing their power plus retaining backwards compatibility and an already pretty strong plug-in selection . The UAD is still “the solution” for those who want to integrate a set of quality plug-ins without hampering their computer’s performance. The quality of the plug-ins from Universal Audio’s catalog is well established and one is sure to find things they like. Lastly, the price remains relatively reasonable in view of their quality.