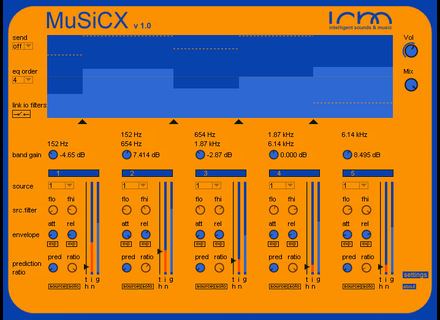 Each of these bands' envelope generators are controlled by pre-filtered signals of any track in a project. The routing between the tracks is done via internal host-independent side chains.

MuSiCX can be used as a mixing tool, e.g. to enhance a vocalist's articulation, or as an effect for, e.g., synth pads pumping with the frequencies of a drum track's instruments - or maybe "more intelligent" ducking, according to the company. MuSiCX can also be a "usual" multi-band compressor or even an equaliser, they say.

Pricing & Availability
Priced at €79, MuSiCX is available now as a VST effect plug-in for Windows.