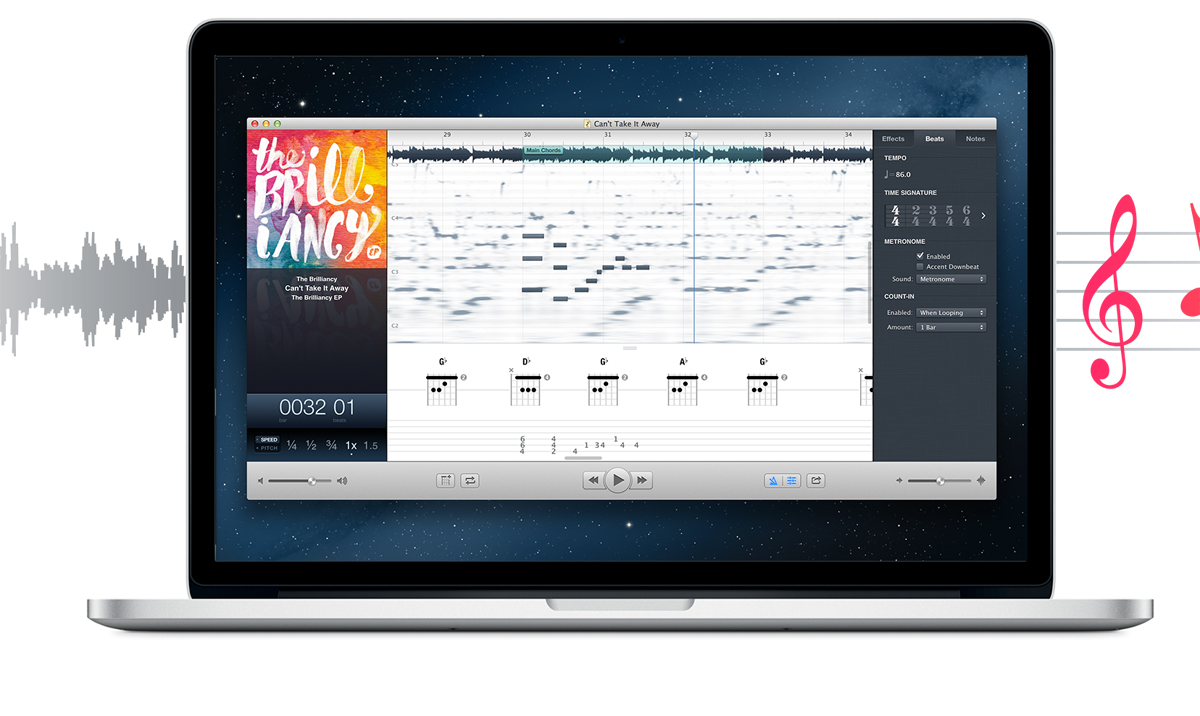 Capo 3 software for Mac ($29.99 via the App Store), from the awesomely named software developer, SuperMegaUltraGroovy, is marketed with the slogan “Reverse Engineering Rock and Roll,” and, indeed, it offers a broad selection of tools that are hugely helpful with learning songs, practicing parts, transposing, transcribing, creating tablature and more.

Much more than just a phrase trainer, Capo 3 is highlighted by the addition of automatic chord detection; a bar/beat grid, and region marking. Returning features include great-sounding speed and pitch algorithms, center-channel canceling, a spectrogram display, EQ, looping, and of course, the capo functionality that gives the software its name.

Capo supports the AIFF, WAV, MP3, and M4A file formats, so I was able to open songs directly out of my iTunes library. When you open a song, it only takes the software a few seconds to do its analysis, and create the waveform and spectrogram displays and show the detected chords, complete with chord diagrams. I’ll talk about both the spectrogram and chord detection later in the review.

The song’s title is displayed on the left hand side, along with any album art that goes with it. Below that is a large readout for bars and beats, and buttons for Speed and Pitch, which activate controls for those two functions, respectively. There are speed settings of 1/4x, 1/2x, 3/4x, 1x (the actual tempo), and 1.5x, but you can also get in-between settings by just dragging your mouse at the bottom of the speed control.

You can adjust pitch up or down octave in semitone increments with a slider, and you can even do fine adjustments that are as little as 1/100th of a semitone. The fine adjustment feature is super handy when you’re dealing with source material that’s recorded a little bit off of standard pitch.

One odd thing I noticed with the pitch control: The highest and lowest points on the slider show +24 and -24, respectively, which leads one to think that there’s actually a two-octave pitch shift in either direction. But I discovered that any settings below
-12 or above +12 don’t have any additional impact on the pitch. According to SuperMegaUltraGroovy, it’s a software bug, which they’re working on repairing.

That aside, both the Pitch and Speed functions are easy to use and the algorithms sound excellent. Other than the 1/4x speed setting, which would sound weird no matter what the algorithm — because it’s so slow — the fidelity remains very good wherever you set the Pitch or Speed.

Transport controls are at the bottom in the middle, and include play, rewind and fast-forward. There’s no “play from beginning” button, but there is a key command (command + left arrow) that jumps the playhead to the beginning.

The main window of an opened song in Capo has a small waveform display that runs across the screen near the top. Just above is the timeline, which reads in one-measure increments, with sub-increments of quarter notes. This bar/beat grid is one of the most important additions in version 3. Although this is the first Mac version of Capo I’ve tried (there’s also an iOS version which is currently less fully featured, but scheduled for a major update soon), I can’t imagine using it without this grid, which gives you a sense of where you are in the song at all times.

The bar lines, but not the beat lines, extend down into the spectrogram area. The spectrogram readout itself shows the energy of the song, via a somewhat faint black and white image that the playhead scrolls across. You can see the pitch of notes in the vertical axis and their duration in the horizontal. Think of it like it’s overlaid on a piano-roll style graphic display. Clicking the mouse on any part of it triggers a corresponding MIDI note from a piano sample. Clicking on a note and dragging downwards with the cursor creates a graphic of a MIDI note at the spot you clicked on, and adds that note in a tablature staff at the bottom of the main screen.

It’s an interesting way to create tablature, and it not only supports guitar tab, but 4-, 5-, and 6-string bass, ukulele, mandolin, and 5-string banjo. It’s a little tricky to use, because sometimes when you mean to just click a note in the spectrogram to audition it before deciding whether to put it into the tab, your hand accidentally moves downward a little and the note appears in the tab before you’ve decided you want it there.

If you click on a note and hear a different pitch than you were hoping for, hovering over the note turns the cursor to a hand icon and you can drag the MIDI note that was created up or down, and the tablature will change accordingly. Because the instruments supported by Capo all are capable of producing the same note on different strings, the app lets you move the tab notation for the selected note to the string you want it to appear on (strings where the note can’t be played are grayed out).

If you open the Song Settings window, which appears on the right side of the screen, there are three tabs: Effects, Beats and Notes, with tools under each. At the top of the Effects tab is a switch labeled Mono, with a left-to-right slider underneath it. This was designed to give you extra control over play-along instrument recordings where the instrument is on one side and the band on the other. By moving the slider to one side or the other, with the Mono button activated (which happens automatically when you hit the extreme right or left with the slider) you can listen to one channel or the other, centered in your speakers or headphones.

Also under the Effects tab is a 10-band graphic EQ for isolating a frequency range in a stereo recording to emphasize elements in that range. Handy presets for midrange and bass emphasis are provided.

Below the EQ is the Voice Reduction feature, which is a Karaoke-style center-channel-cancelling effect. It’s great for situations where you’re working with a vocal from a song, and don’t want to hear the lead singer. If you’re trying to figure out a good key to sing a particular song in, it’s useful to turn off the vocal and sing along with the track, and use the pitch control to try different keys until you find the one that fits your vocal range.

The Beats tab gives you an accurate tempo reading for the song in BPM, out to one decimal place. If you’re bringing a song to your band mates to learn, you can provide the drummer with the exact tempo setting.

You can also choose a time signature, and when you change it, it’s reflected in the bar/beat grid. In addition there’s a metronome that will play in time with the song, by locking into the grid, and there's even an adjustable count-in feature.

The Notes tab features a dropdown for the instrument type, and another to pick the tuning from choices appropriate for the selected instrument. For guitar, I counted 55 different tunings (wow) in addition to Standard, including some pretty obscure ones like Gambale, Guinivere, and Open C#. When you select an alternate tuning, any tablature you’ve already entered changes accordingly, as do the chord names and chord diagrams.

The Capo feature lets you put a virtual capo on the instrument being tabbed or charted out. Again, the tab changes accordingly, as do the chord diagrams.

One of the most useful features is the ability to define regions, which can then be color coded, named, and most important of all, looped. Say you’re learning a solo, you could first break it up into digestible chunks, and make each into a color-coded region. Then work on learning one at a time, slowed down with the speed control and looped.

Finally, lets get to the chord detection, which is one of Capo’s most highly touted new features. As mentioned, the chords and chord diagrams (the latter can be turned off) automatically appear after Capo analyzes the song file. I was excited by the possibilities it offered for quickly learning songs or making charts. (You can’t print out of Capo, so you can only use the chord readout for reference.). But in practice, the chord detection seems like a half-finished feature, which only  seems to get a fraction of the chords in a given song correct. The software makers are pretty up front about it, even stating in the manual “Because no chord detection engine is perfect, and music can get complicated, Capo was designed to let you correct its detected chords or add new entries very quickly and easily.”

When you see a chord that Capo got wrong, you can double click on it and you’re presented with a selection of related chords, which usually has the one you’re looking for in it, and clicking on the correct one replaces the original chord in the timeline. You can also enter a different chord name if the one you want isn’t in the list.

I first tested out the chord detection on songs with simple harmonic structures, like blues songs. One was, “Statesboro Blues” from the classic The Allman Brothers Live at the Fillmore East.  Capo missed numerous chords in it, added extraneous chords, and even detected four chords before the song started, when the PA announcer was introducing the band.

On more complex songs, such as Bill Evans’ live version of  “On Green Dolphin Street,” the results were even less accurate. I’m guessing the algorithm found maybe 25 percent of the chords in the song, and those that it did find were simplified, mainly appearing as simple minor and major chords. Never once in all the songs I opened did I see a 7th chord (dominant or major), or anything with 9ths, 11ths, 13ths and so forth.

The bottom line is that you have to do a lot of corrections to get all the chords mapped out accurately. The developer told me that they are working on a totally new chord detection engine for a future release, so hopefully this feature will be much stronger in subsequent versions.

Once you do have the chords entered right, changing the song’s key with the pitch control results in all the chords (and chord symbols) changing to compensate, which is hugely useful, and could be a big time saver if you had to, say, make a chart for a song in a transposed key to fit the range of a new vocalist in a band or show.

Overall, I found Capo to be an extremely useful application that’s great for learning, practicing, and teaching music. It seamlessly allows you to adjust the tempo and key of a song, and other than at extreme settings, you don’t feel like you’re compromising quality. The suite of included effects gives you additional versatility, and the capo and alternate-tuning features are superb and deep.

The chord detection feature is disappointing, and is clearly not ready for prime time, but you can do so much else with Capo that it’s not a deal breaker by any stretch. Priced at under $30, Capo is a software application that every musician will find plenty of practical uses for.  If you play one of the seven supported instruments, it’s even better. I highly recommend Capo, and plan to use it regularly from now on.

Check out the video below to see Capo in action.