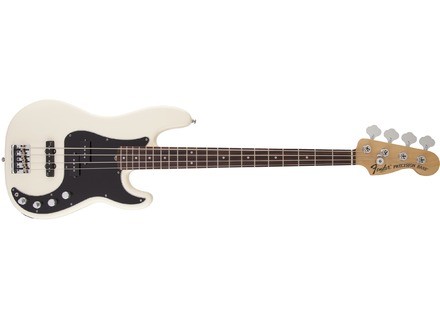 View other reviews for this product:
Features: 8
Okay so on I'm not making me spread else do better than me. The maple fingerboard is that I tried the handle was a bit confused at first knowing that I had the 5 string last few years, with a handle end and little broad, I had the impression of have a log in your hands!
Slight low for me, well balanced, I had read many good and when I got in the hands that made me all funny.
Two microphones, volume, balance, bass / treble and midrange knob, the sound in Pbass versatile and well Burne, to say that what a lot of surfing styles just by moving your hand, I love ! However it's assets, and it shows.

Use: 8
Over time I took my marks on the neck, I have big hands and I feel good hold, it is reassuring eventually. The bass does not sting the nose and it is great agreement. I just want to say that this bass is a great tool, reliable, convenient and versatile. So, as I have two basses, well I play and I often find my account quickly and easily.

Sound: 10
Then there is always more different ... etc ... I think it sounds good as it should, nothing to say, when you play fat fat when it comes to slamming slapper rather I play rock, but I sent in all styles reggae, metal, fusion, funk, jazz, I play with my fingers, a pick, and slap on his accuracy what, we walk on the handle and you realize that among all these wonderful models that exist, this one is not famous for no reason!

Some would say that it is less Pbass done slapper, but frankly with maple fingerboard that makes him broadly, to the slamming or must. For my part I play with a lot of treble so I found it easily.

I have not found it a major fault, if it is like it or not his fender, and I confess that I was not convinced before putting my legs over. It enchentais me not to have the same sound as the bass half of the planet (this is an exaggeration!), And finally I got stuck as igh!

I played on an Ampeg 4x10 svt3pro with a 1x15 and it sounded! And since I went on a Marshall head VBA400 all lamps, and even better, of course!

Just a Poins negative about the sound, you will never have the vintage sound, it always sounds very "manly" even when playing cool cool, this bass a rather modern malgrès versatility, sound active, neither more nor less. But it is also what I was looking for!

Final score: 9.5
I put this note because malgrès me, she filled all my expectations both in terms of sound has many levels.
I use it for almost two years, I tried to return to the four rope after a few years on my Pedulla RB5 (nothing to do his level!), So I wanted an instrument that sounds by slapping that goes everywhere and sends the steak, keeping at least the same quality without ruining me (that's a lot of criteria!).

I had a case on the Pedulla and I would have been angry to more expensive instrument in a less finished! Taken for 990euros, I just think the bass was a year .... Say if I had to buy new I would have taken more time to compare with other models.

I had a great occaz and you can buy this kind of model eyes closed I think. In any case I can not imagine selling it.
See the source
Did you find this review helpful?yesno
Cookies help us improve performance, enhance user experience and deliver our services. By using our services, you agree to our use of cookies. Find out more.