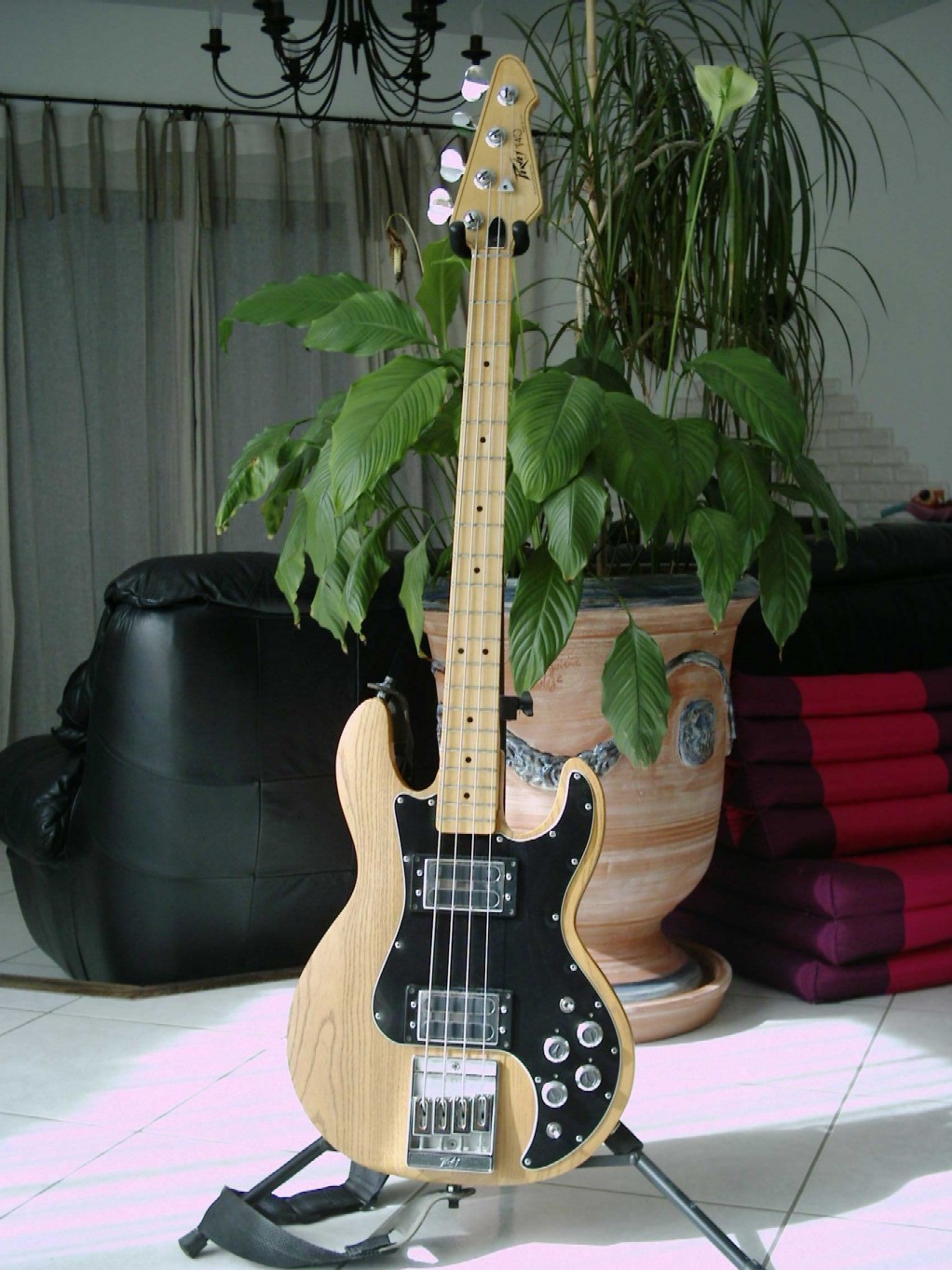 View other reviews for this product:
RumbleBass

Publié le 12/15/13 à 04:32
Value For Money : Poor
All just been said in previous posts, and you can easily find other info on the net ...
Peavey made by the U.S. from 1978 to 1985 to 1986, several developments differentiate eras.
Northern ash body well dense, 3 or 5 parts following the natural années.Finition most commonly satin, black, white also, more rarely sunburst, even rarer burgundy and blue spangled super scarce in recent years.
2 pieces maple neck, 20 frets, the key is not reported. Models of rosewood keys exist. A fretless version of the catalog was also the T-40FL. Steel nut until 1983, later more plastic.
2 humbuckers and a very special electronics. 2 volumes 2 tones, a micro switch and a phase inversion switch on the south coil bridge pickup. 2 mic models depending on the year. The "toasters" 78 to 81/82 then the "blades" with the magnet apparent. The fact is that the blades therefore the magnet a little closer to the strings, so a bit brighter and certainly more powerful, but at the cost of having the unpleasant snap strings against the ropes if you bourrinez too .. . for both toasters already have enough brightness and bite. Note that some recent blades tend to break their coils due to a more economical design. Care when a possible dismantling of electronics.
A big big bridge, string-through mounting. Provide games Longscale strings, because the through mounting.

Channel profile generally very P 70's, a little Rick, wide and deep enough anyway. It is not at all in the JB style or MM. Caution strings and mid ground are quite near the edge of button, it can destabilize the beginning. Although this set is the highway. In addition to a trussrod, an adjusting screw in the heel allows you to adjust the angle handle / body. It's good wood, hard, once set it not move.
Where it loses points is on the scale. Close to 5.5kg. But very well balanced, it bothers me less back and shoulder my Stingray 5 for example. It may be a matter of size, I measure 1m90.
The first models are 78 "slab" without cuts right arm or abdomen, and therefore much less comfortable.

Navigating passive territory and 70's. But what it does well!
Electronics rout a bit by its operation, not at all conventional.
A micro volume, a pickup selector, so far so good ...
Respective tone fully open 8 to 10, the microphone works in single coil. Below 8 micro switches to humbucker mode.
The phase inversion switch plays a pickup coil. And it has charm! Position in phase, the two microphones typically operate, if not the mere passage / humbucker tones with. Reversing the phase, the two volumes fully open we get a sound ... weak and tinny. Yes, because the microphones and work backwards ... All the subtlety of the assembly that it should then close the volume of the microphones so that it sounds. And here is the magic, all other sound palette opens. And it pushes hard ass.
So we get lost in the beginning, so there is opportunities and subtleties of color and different settings.
But once mastered it, truthfully, all the sounds of vintage passive are possible and imitable. A difficult blind to the difference. But very easy to prefer the T-40 to the original! Fender P, JB, MM first year, EB3, TBird, Rick, all the sounds are there. With a smaller, a je ne sais quoi.
Ass that prefer the former course. We're not there to do in the modern with this bass.

The other drawback is that this bass is fairly rare to find here. Some expensive models in Germany, two or three that come in the year in France, the odds in recent months roros 650 for models 79/83 natural or black finish, maple keys, with their flightcase. A yes the flightcase alone is a model (horror?) Of 80's design. Indestructible molded, but then heavy and cumbersome. If the purchase in the U.S. does not scare you, there are found to shovel all times, the old player model mint, and prices. Prefer models until 83, after Peavey trimmed quality. (Plastic nut, weaker pickups, pickguard least worked ...)
If you're ready to go hunting for a few months, you will have the ultimate low for the vintage sound. But certainly there is not marked on Fender or Gibson Rickenbaker ... it does not matter at all in her mind and under the hood, just close your eyes. And what face she has!