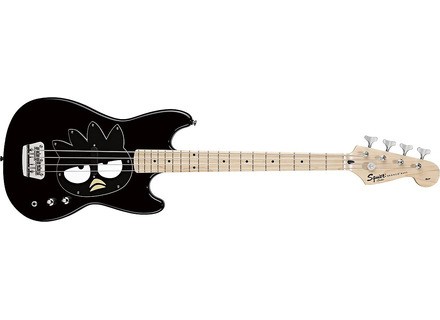 View other reviews for this product:
"Crafted in Indonsia" is what you read Behind the head sign Squier
"Designed and backed by Fender"
What about more than the opinions Previous?
What is a diapason 30 '
So a low-type precision Bass "small for small hands.

Although smaller, the handle is no less a low pais "adult"
I look forward to try to make a little girl I know who dream of playing bass, but is hampered by his mother, who prefers to see her play guitar.
I have to redo rglages string height as curling a bit. I think I'll touch again but I will first play of the same over before tweaking.

For a bass guitar with a mic, its pretty amazing.
Pleasant surprise indeed. It sounds as though a normal size bass in the same price range. It is quite impressive!
She has just two pots: volume, tone
It is therefore somewhat limited but it is the precision of caractristique base.
I tried a Fender Rumble 100

I bought a week ago for a girl of 14 who dreams of playing bass. I give guitar lessons and I getting ready for a concert season with my students. Having a low small at hand, allows me to play for children from 10-12 years.
The look with the head of the penguin Badtz Manu is nice and goes into the IDE of Hello Kitty guitar. It does not catch all the young, but those who hang on are crazy, even little girls, a fan of Hello Kitty.
I see with exprience if it is a good choice.
It is a "toy" nice to take his first steps into the world of bass players.
I shall not fail to notice UNESCORecords when I saw two, three kids have fun with.

Upd August 25, 2009:
I almost forgot my promise! I did do a concert in late June my young lves. Small groups singing, guitars, keyboards, bass, drums. On stage, three Momes have played on the Bronco. The girl quoted above was played on the gift his mother gave him for the occasion, an Ibanez bass.
It is all the same three months of learning about bronco. The three other children who played on the Bronco are two girls aged 10 and 12 and a boy of 11 years. Three pupils guitarists. But the 10 year old girl has contracted the virus, she pushed her father adj buy him a bass (a Bronco course!)
Early was found tricks to play without too much problem at the top of the handle (box a bit too big for his little left hand) but it took away the good gesture of ct right hand.

The other two children will appreciate his game but will never Premire for bassists.

What pleases first child is the look of the Bronco. The head of Batz Manu is all the rage, especially among fans of Hello Kitty. Finally, the thickness of the handle appears to facilitate apprentisssage. But 10 years is really the extreme limit of age for learning the bass with this instrument. Firstly because of the size but also because of the weight of the instrument.
Children do not liked to play with standing. "It's too heavy!" m'ont'ils said unanimously.
See the source
Did you find this review helpful?yesno
Cookies help us improve performance, enhance user experience and deliver our services. By using our services, you agree to our use of cookies. Find out more.