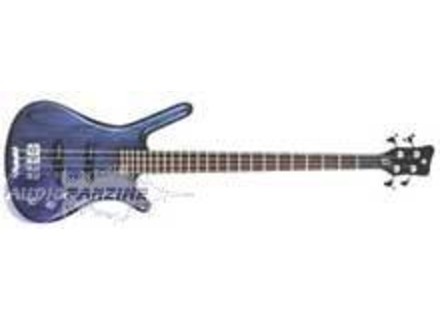 View other reviews for this product:
This is a Warwick Corvette bass, made in China, even though this is a German company. The bass has a bolt on neck, which is made of ovangkol (which is exotic and new to me). The body of the guitar is made out of bubinga, which is also rather exotic. The bridge is a two-piece Warwick bridge. There are 24 frets. The 2 pickups on the bass I played were active, though I've seen the same model with passive pickups. There is a volume knob for each pickup and a tone knob.

The bass is relatively easy to play, though it does feel very big to me in comparison to some of the other basses I am familiar with. Getting a nice sound out of this is relatively simple, assuming this is the kind of bass sound you like. It's a pretty heavy bass, that is actually kind of a beast to play. I really struggled to master it at first, it's very physically demanding which makes a lot of sense considering its enormous sound. I may just need to practice with it more, considering I am a relatively recent convert to Warwick.

I don't know if I like this sound of bass very much. It is definitely extremely powerful. However, compared to a P-Bass or something similar, I think it has a little bit too much. A friend of mine described it as a roaring sound, and I would have to agree with him. I used it with a Marshall bass amp, which probably added to the enormous power of the sound. I would have to say that metal bassists would really like this, it's a super low-end heavy bass that really moves the sound forward. I have heard that Erykah Badu's bassist also uses Warwick's, though not this model. This also makes sense, as the low end in neo-soul is similarly enormous. This doesn't really work for me, the rock that I play requires a little bit less out of the low end and more character.

I liked the Warwick for what it was, but it was tough for me to play it, and it was a little too heavy-sounding for me to play well. I don't think I would stick with this bass for very long, but I would say that it is certainly a unique instrument, and I'd recommend it to people who's taste is similar to what I already described in the last paragraph.
Did you find this review helpful?yesno
Cookies help us improve performance, enhance user experience and deliver our services. By using our services, you agree to our use of cookies. Find out more.