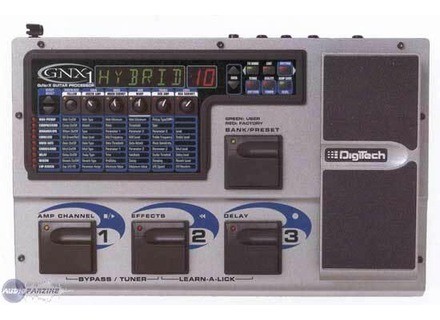 GNX1, Multi-Effects for Electric Guitar from DigiTech in the GNX series.

View other reviews for this product:
So jy not know much either, but:

editable via a PC MIDI (or mac) but never test!
jack or MIDI connectors

very manual way for that ny connaisent little in multi-effects (which I respect the party) so I have not used for several me!

different pedals not worth a multi-effects ... (It's still my opinion) the sound is not as clean, still further back with effects pedals ...

The effects are deadly that's for sure! but after I can not switch from one to another quite easily

used with a guitar, at the beginning of a transistor amp and it was really not that great! then a lamp, ca went better already

while the effects are spot on!

then 10 for 6 to its effects (a less mess and it must sound good) so we will put 8 c, but really for the effects!

I've since its release so it's been a few years
It's too complicated for me I went on basic pedals, I have not much effect, but diversity in sound and decision-heads are not photographs!

It was my first multi-effects (and probably my last! but it's not my thing, there are those who love ...)
the RAPORT qualitprix is ​​normal, for if you're against a little motivation to look good with her, to get really interesting OCCAZ ca!

So with the experience I would do not have that choice but I just Pacek idea about that it was not my thing ... but try with other multi effects has some friends that is is one of the better (except the most recent multi-effects I've never had to walk)

and colleagues such as below the offset between the effects very annoying!
See the source
Did you find this review helpful?yesno
Cookies help us improve performance, enhance user experience and deliver our services. By using our services, you agree to our use of cookies. Find out more.