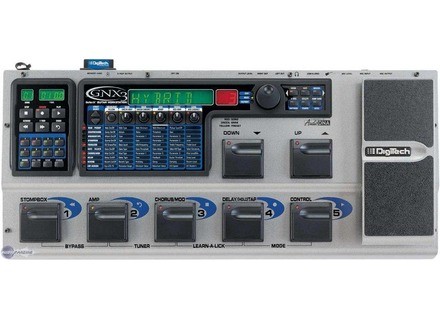 GNX3, Multi-Effects for Electric Guitar from DigiTech in the GNX series.

View other reviews for this product:
Multi-effect with amp modeling and speaker with expression pedal editable and 8-track recorder and drum machine to replace the drummer who is still absent. What a bomb!

This is not the simplest of multi-effects at first but then when you know it's going super fast to create a sound:
we chose an amplifier and a speaker is not even the first mixed with another amp and one speaker (c WARP mode but ca not use a little).
Then we add effects if you want and happiness so c c easy. there is a table or index and c the best that each has an associated preset knob. Just turn it and c it!

Sounds very good if we Cumulative performance too much because the AC is a bit synthetic, especially if you have a transistor amp.
All the effects are amazing especially the compressor and gate!
There is also a whammy that sounds anything.
Wah-wah, chorus, reverb, equalizer, etc. ...
Everything sounds!

I bought it there one and a half years and I played as a soloist in a hard rock band. I was looking for a multi effect with good distortion because I had to zoom épopque 4040 that I associated with a pedal marshall distortion of the result but I was happy that I went on stage in the light reverb and delay distortion was juggling périlleux.G hesitated a Boss GT-6 c, but the 8-track recorder that I believe. Indeed on stage I used to run a sequence pre-register at home as a sampler without spending the price of a sampler!
Now I play in a pop band and I separated because it sounds to be a fo tube amp and a guitar character. If you are solo or you made the hard-rock DARK!
See the source
Did you find this review helpful?yesno
Cookies help us improve performance, enhance user experience and deliver our services. By using our services, you agree to our use of cookies. Find out more.