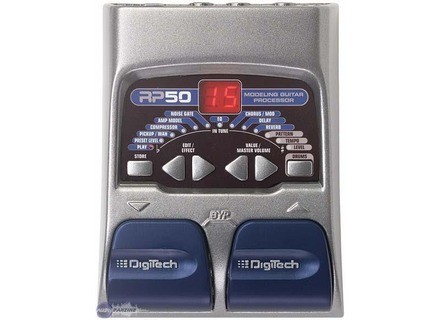 View other reviews for this product:
i paid 80 quid for the rp50 from the drum and guitar centre in cambridge, i had long needed a pedal that gave me more than just distotion i had tried several others but i found this to my liking the most.

it was probably the best 80quid id ever spent it done everthing i wanted it to at the time. I have had it now for about a year the drum beats where really handy for practising with and you could make your own effects wich is cool it makes you sound unique, the effects were really clean and id get a really nice tone from them, some of them were a bit farout! but im sure someone would find a use for them.

id didnt like it how i had to scroll through the effects to get the one i wanted, you can set the ones you want to like numbers 1...2...3..etc but if you wanted to get too effect 4 quickly from effect 1 you had to click 3 times and doing that while playing live can be really dodgy if you hold it for to long youl go to the totally wrong one and i could be a bit embbarasing but thats probably the only thing wrong with it.

its lastest me a year of constant use and its not even started to show any sign of wear so it seems very durable.

deffinatley worth getting if youv never had an effects pedal before but if you have and youv been playing more than about a year i would suggest gettin the rp200 or even the rp300(thats what i have now)its the best out of them all.