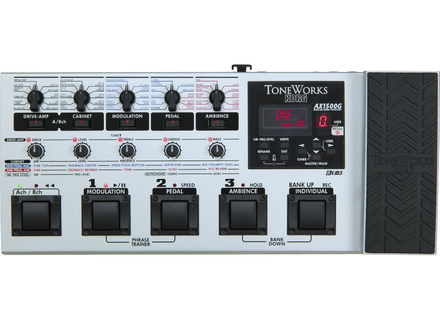 View other reviews for this product:
I purchased this from the Academy of Music in Brisbane, Australia for $499 (down from $699 because another store was selling them for that price). The main motivation behind the purchase was that I was becoming bored with the limitations of my Korg Toneworks AX1G which I'd had for three years, and I felt it was time to upgrade the rig.

This unit offers a much greater tonal variety than what it's little brother offers, although I guess that's what you get for double the price. Most of the distortions have plenty of guts, the clean sounds are excellent, and the acoustic simulator, while not spectacular, does a near enough job. Where the distortions and clean sounds on the AX1G are thin and fizzy, the AX1500G's sounds are thick, strong and robust and depending on your use of EQ settings can offer a good tonal spread.

The knobs and dials setup is much more user friendly than the push button style of the AX1G, and the LED screen is fairly easy to read, day or night, except when there's a light directly over the top of the unit. This however only becomes a problem when operating the tuner because the glare limits your ability to see what's showing on the screen. I've found I can overcome this by shadowing the unit with my foot.

In addition, the expression pedal has plenty of weight to it, so it offers some resistance on the travel, unlike the AX1G, which is made of lightweight plastic and can be operated with your big toe.

I've got to wonder if Korg will ever master a decent overdrive. One of the few similarities between the AX1G and its bigger brother is pathetic overdrive, unless it is used in exactly the right applications. If you're hoping the Tube OD on the AX1500G can deliver an early Malmsteen-like power crunch, you will be disappointed - that's something best left to the stronger distortions on the unit, such as the Classic Distortion or the British Stack.

I have found, however, that when the drive is kept to 1 or 2, the Tube OD effect does a very good job of giving a little extra bite to a more-or-less clean sound (something in the style of Hank Marvin et al).

A fault that I've read in other reviews of the AX1500G is the limited range on the expression pedal. I'm afraid I have to agree. This doesn't really bother me since I almost never use the expression pedal for anything except volume swells, and it does this well enough. There is someone on the net who operates a user-support forum website who has provided instructions for a modification to extend the travel of the pedal, and hence, improve the range on the pedal.

The bank-down set-up is a bit ugly. To go down a bank necessitates hitting two buttons simultaneously, and it doesn't always come off as you'd like. The same guy who offers the mod for the expression pedal also has a mod for adding a button exclusively for the bank down action.

To put it simply, solid as a rock. The thing is almost entirely hard metal casing, and packs about 2 kilos of weight. Once when I was in a bad mood and kicked the thing across the room, probably doing more damage to my toes than to the unit. I've read stories of people driving their cars over these things by accident and not doing a scrap of damage. I believe them.

This is a top intermediate unit. The sounds available are far better than those offered by some of the smaller, cheaper units, but it comes at a far better price than similar offerings from competitors such Zoom, Boss or Digitech.