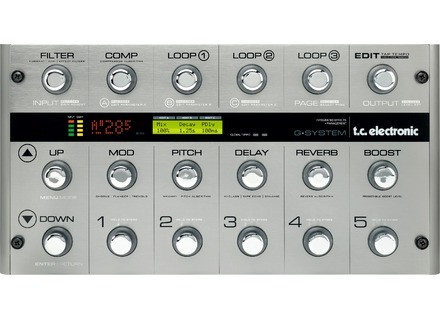 G-System, Multi-Effects for Electric Guitar from TC Electronic in the G-System series.

G-System has been updated with a redesigned input circuit and a new software update with more effects, more features and 100 new presets…

All new G-Systems ship with version 4.0 software, which is also a free upgrade for existing GSystem owners and a sure-fire package of extras.

The first big addition is the number of effects on offer. A new Univibe effect has been added, which is ideal for the Hendrix ‘Machine Gun’-style phase-shifting effect. A brand new doubler is also included, which offers the classic doubling effect so prevalent in
’80s and ’90s Rock and Metal. The reverbs have also been reprogrammed and now offer even more realistic room and spring reverbs, TC says.

Other features include a new KillDry option so G-System can be incorporated in a parallel effects loop or with a line mixer.

The update is free and existing G-System owners can upgrade their units here: www.tcelectronic.com/g-system.