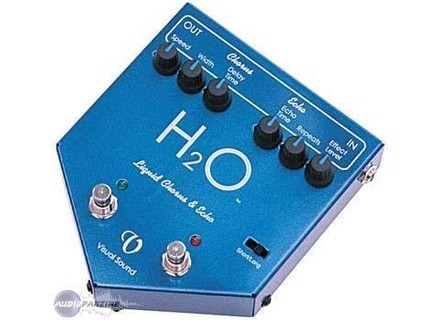 H2O V1, Multi-Effects for Electric Guitar from Truetone in the V1 series.

View other reviews for this product:
This is a great pedal. It contains an echo and a chorus effect. Each effect has it's on footswitch so you can turn on one of them or both of them. It also has a switch on the Echo side to switch between long and short delay trails.
It has three knobs on each effect to sculpt it to your tastes. It also has an effected out, and a dry out.

The chorus on this is VERY good. It's a nice, thick, lush, watery chorus. It can easily go from subtle to alien like warbles with the turn of a few knobs. I mainly use it too add depth and to thicken up my cleans, which it does VERY well. It does color the sound a bit, but I don't mind it, and actually like it a bit.
The Echo is decent. It's not the greatest echo in the world, but it's not the worst. It works well for what I need though. I mainly use it with short delay time, and long repeats to thicken up my leads and cleans, which it does well.

This pedal is great. This is easily one of the best choruses I've tried. Thick, Lush, and watery. The echo is decent. A bit dark, but still decent. I got it mainly for the chorus channel since I'm not much of a delay guy.
I think it was well worth the one hundred and ten dollars I paid for it.
Did you find this review helpful?yesno
Cookies help us improve performance, enhance user experience and deliver our services. By using our services, you agree to our use of cookies. Find out more.