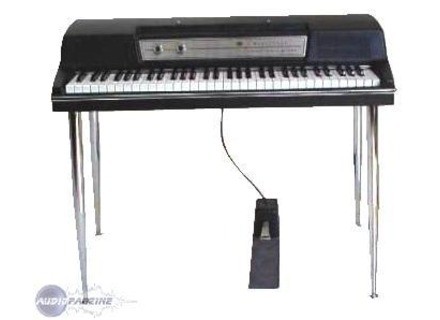 200A, Electric Piano from Wurlitzer.

View other reviews for this product:
Five and a half octaves in a molded plastic case fawn 70s, almost a toy look, and yet ..... a legend!

At departure it was intended as a small study piano with Americans, some of them were linkable in the schools of music but fortunately he came out of the classroom to accompany the greatest hits of history of pop: "money", "logical song" ........

Unlike the Fender Rhodes electric piano is a functioning with quite Paisses strips loaded with static electricity, sound possde then a biting attack and another color to it if Particular re. It is quite surprising at the beginning to feel the vibrations of the reeds get onto the keyboard, you suddenly port in a world that is far, very far from the accumulators

the keyboard is hard enough pieces of the mechanical hammers are short and quick answer is it possible to make these famous sixteenth note rhythm in the Manire of "Supertramp".
Choose rather to make rock riffs / pop, put him a nice little chorus and "Goodbye Stranger"

it becomes downright magical
For the jazz fusion prfrez a Rhodes has her much more sustain, but Ray Charles Vonda Sheppard, Wurli baladera is both the blue rythm'and the country.
It possde vibrato which only the depth varies, incorporated an amp and there is a cot hp each. It is autonomous, not too heavy, once the foot enlevs he takes under his arm like a big synth.
It is fragile, capricious, rgler not easy, but once that was over the fingers, the guaranteed thrill.
See the source
Did you find this review helpful?yesno
Cookies help us improve performance, enhance user experience and deliver our services. By using our services, you agree to our use of cookies. Find out more.