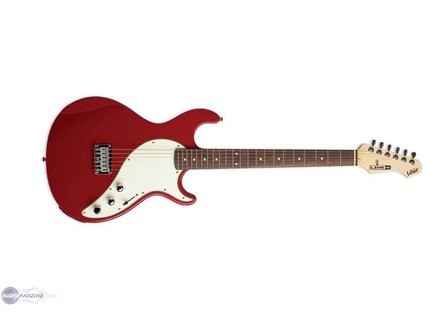 Variax 300, Electric solidbody guitar with modeling from Line 6 in the Variax Electric series.

View other reviews for this product:
The Variax 300 is an electric guitar from Line 6 that models the sound of other electric guitars by using digital signal processing. This guitar does not have traditional magnetic pickups (single-coil or humbucker). Rather it uses a piezo pick-up in the bridge to transduce the string vibrations to an electric signal. This guitar can sound like a Telecaster, Strat, Les Paul, Firebird, Gretsch, Rickenbacker, 335, and a bunch of acoustic guitars.
The first question everyone asks about digital modeling is: does it sound like the real thing? Honestly, I was very skeptical about this guitar before I tried it out. My opinion is that it sounds very good, and very similar to the guitars it is modeling. I don't think it is a fair comparison to criticize the entry level Variax because it doesn't sound perfectly like a $4000 Les Paul. I think the better comparison is does the Variax model of the top-of-the-line Strat sound better than a Squier Strat is the same price range as the Variax 300. In this comparison, the sound of the Variax is much better than a Squier in the same price range. Based on sound quality - I think the Variax 300 is miles ahead of anything else in its price range.
The biggest problem with the Variax 300, is the physical guitar seems to be made very cheap. The body, neck, and hardware of the guitar are really cheap. Line 6 isn't manufacturing this guitar anymore. If you are trying to buy it, then you are going to have to buy it used. Unless you find one that is in really good condition, I wouldn't count it lasting for years and years to come.
I purchased this guitar 'new' when Line 6 was ending production and trying to dump the last remaining units. I try my best to take really good care of my gear so that it will last a long time. Unfortunately, after owning the guitar for several years, it was stolen out of my church. I searched for a long time for a replacement. All the 'used' versions that I found had something wrong. Eventually, I found a used Variax 700 in great condition. This guitar has the same exact modeled sounds, and also has better hardware.
Line 6 has now released the James Tyler Variax. Someday, I am sure I will buy one of these guitars to upgrade my Variax 700. If you are in the price range for a low- or mid-priced guitar, I think finding a used Variax 600/700 is a great idea. This guitar will sound better than buying a Epiphone or Squier. If you can afford the James Tyler Variax, it is probably your best bet. Well...unless you can afford 20 different $5000 guitars - then you can forget about modeling.
Did you find this review helpful?yesno