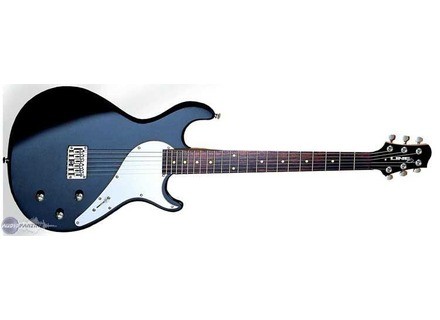 Variax 500, Electric solidbody guitar with modeling from Line 6 in the Variax Electric series.

Value For Money : Excellent
View other reviews for this product:
This is THE FIRST modlisation guitar. It is made in Korea, it uses wood equivalents of those guitars under license or some kind Epiphone Squier, gave an ide of the quality of violin making. A round mat, 22 frets, no pickups apparent, everything is in the bridge (but not a piezo). Rglagles worthy of a telecaster: one volume, one Tone. The five positions slecteur reminds one of a stratum, it seems of good quality.
The mcaniques oil bath are also reliable. Brief on the CHARACTERISTICS al the equivalent of a guitar 500 euros, the electronic diffrence prs has nothing to do: two jacks, one for a jack Stereo (yes you read that right!) and the other hidden by a plastic cap to allow the APRS Line6 updates. Moreover, the troisime knob to select the custom presets are two areas likely to store two new sounds.

First contact, the stick is fine. If the design of the guitar lovers will frmir gibson beautiful violin, one feels trs comfortable as a good standard fender.
In fact the guitar lacks personality but no default Submitted significant, it is lgre, easy to play, the finish is perfect. The sound as it surprises. One would expect a lag well as a MIDI guitar but is not a MIDI guitar! The more difficult it is to ignore the lack of corrlation between the violin and its product. That produce sounds fender still happening, one of his Les Paul pais the limit, but that of an L-5 3 / 4 body fucks a bad, those of a more sound .. .

For a list of presets see the site, any Manir I think that those who consult this notice are wondering how the sound can be modlises Fidler on guitar. First I want to talk REALLY prciser that the sound quality should be good in all styles: blues, rock, rockabilly, funk, jazz, jazz-rock, pop, metal, country . This is not my case, so we test the guitar two, but one amp electric. Moreover, the comparison is meaningful only when the guitars well connate origin. I had a telecaster 90, a strat rdition 57, an epiphone 3 / 4 Cash Joe Pass, a Les Paul Studio, a Les Paul custom, some electro-acoustic number with a 12-string, but not enough to talk of his Gretsh, the Les Paul Jr., the Super 400 and other vintages.
Apart from the musicians or a journalist I do not specially be able to give my opinion on everything. Anyway, the sounds of tele seemed to me identical to those strat perfect on micro acute central considerably less compelling for both positions dernires central / serious. The sounds of Les Paul are really good, we find that if its fat CHARACTERISTICS, sounds jous with L5 Wes Montgomery&#39;s plans are quite convincing. The bluff me acoustic 12-string including (without killing the sound of fingers or play with a harmonizer). I have all felt the same as rendering the best silent mdium and acute than in the bass. I also think that the principle of modlisation acoustic shows some limitations when we go on an agreement, in fact, is now in gnral that the quality of violin playing in the most sustain and amplitude of continuous tone. As the violin in the Variax is probably not included in the production of sound, it lacks a little something. Fan I was considering to buy a slide dobro, as saying that given the quality of the presets I will not. For the rest I do not be habilis comment.
I have tried sr saturated rock sounds and your exact trs is good.

Difficult to get an objective opinion, I think all of dpend which Manir Whereas the guitars. Here there is no passion! The violin is not like there are more enjoyable to play guitar. For me, the gibson but they make me RVer cotent too expensive these days. Same for the fender, the look is timeless, the legends, the image we give of oneself with a tele natural wood finish or a white Stratocaster. briefly forget the look. Think in terms of sound and price. A 1150 euros, I think Line6 made every effort to draw attention without gouging the clientle, they provide an AB box, a bag, a manual consquent they promise new sounds. These are in addition to people who have proven themselves in the field with the POD.
For me, the Variax is not the ultimate guitar, but it is certainly the ultimate second guitar! As Premire take the guitar makes you vibrate you to explore the sound up more thirsty and in a form never tire. For the second guitar, the Variax opens all the possible fields for forays into other styles without breaking the bank with guitars mid-range and above register.
For me it is a palette of his supplmentaire with more than one guitarist rve, the ultimate studio guitar but no scne.
See the source
Did you find this review helpful?yesno
Cookies help us improve performance, enhance user experience and deliver our services. By using our services, you agree to our use of cookies. Find out more.