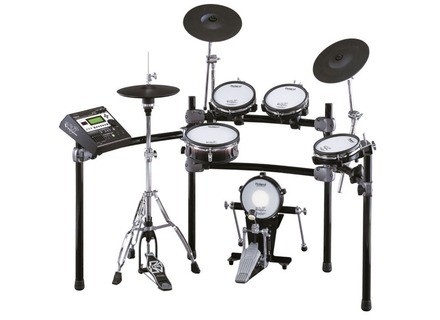 TD-12KV, Electronic Drum Kit from Roland in the TD series.

View other reviews for this product:
I reu two weeks ago, it has been two weeks so I was drummer!

I can not really compare it with an acoustic drummer, but a friend assures me that the touch is nearly identical ... and that to have tried several times the TD20, the diffrence in price is justified absolutely not (the only diffrence are: Size of pads, large TD20 on the toms are the size of the snare of the TD12, the number of pads (5 instead of 3 on the TD12), the bass drum and hi-hat (2 pices against a mobile for the TD12). The sound module is less complete, but the seller assures me that the sounds are better, because latest issue and developed.

Not much to add that dj t tt said ... except that it is indeed not be emptied of its own kit ...

Frankly a good purchase, I think.
See the source
Did you find this review helpful?yesno
Cookies help us improve performance, enhance user experience and deliver our services. By using our services, you agree to our use of cookies. Find out more.