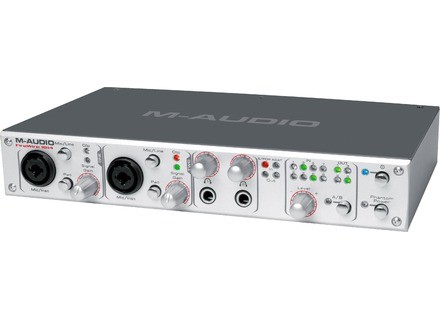 Firewire 18/14, FireWire audio interface from M-Audio in the FireWire series.

View other reviews for this product:
I would point out that the notes I have given are to be considered only as part of my computer config and not in a general framework.

I use it (had!) In home studio with a laptop asus A6BG

Only small downside of manufacturing, XLR and switch on the front parraisent me a little fragile.

1 => I install the driver: no prob
2 => I reboot the PC and I plug the card: the card is detected and the wizard starts
3 => At the end of the wizard, he said that there has been a problem and that the material is absent ...
4 => reboot
5 => the console that manages the card is a slowness that has no name
6 => there is no sound
7 => reboot and disconnect the map
8 => reinstalling drivers, rebooting and re-branching of the map
9 => DEGEULASE sound as if all the trim back a prop! it saturates the music of windob Start up!
10 => rebooting
11 => it works!

Well, I will not try to understand now that it works but hey ....

Added 11/09/05: The card was returned due to chronic instabilitée with my laptop (has a problem with the IRQ not resolvable under the support of m-audio). The card functioned after a fashion for 30 minutes before cracking, saturation, and other inconveniences apparaisent.

I have tested that configuration very simple audio meaning you play music, test multitrack recording with cubase and cool edit. for now, it works the first time!
Added 11/09/05: Unfortunately for me, I spoke a bit too fast by filing the notice after having functioned as a bit, the card was no longer able to read a simple music file and flashing mettai and a clipper when no microphone was connected ...
always in my config

What I do not
_l'installation hazardous
_the some cheap plastic switch on the front
Added 11/09/05: On paper, this card and very interesting, but as part of my config (asus a6bg) I was Extremely disappointed puisqu'impossible has to Implementable correctly. Damage
Addition of 20/10/05: I have been to replace the card for purchasing a Tascam DM24 and her firewire interface. With the same laptop on which the m-audio did not work, it turns out that I had worked flawlessly in the tascam firewire.
I tested with 12 tracks for recording and reading and not a single problem!
I begin seriously to doubt the driver of the m-audio, and even the card itself!
See the source
Did you find this review helpful?yesno
Cookies help us improve performance, enhance user experience and deliver our services. By using our services, you agree to our use of cookies. Find out more.