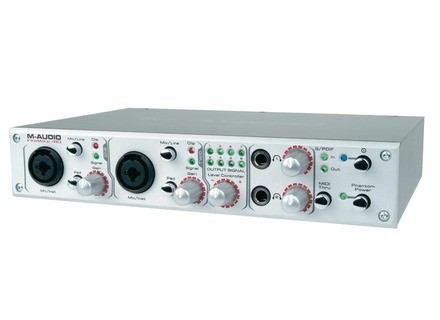 Firewire 410, FireWire audio interface from M-Audio in the FireWire series.

Product replaced by the M-Audio ProFire 610.

Value For Money : Excellent
View other reviews for this product:
I bought this interface for its low price, its eight outputs, flexible routing at the output and firewire CONNECTIVITY.
I use it to make music in Cubase SX, Reason [...], with the south.
I use it with an Asus A4G (laptop) P4 3.2 Ghz, 512MB RAM, a 60GB disk rather slow.
My sound card is itself connected to a Yamaha 01V level audio outputs (jack) and a Roland XP10 for MIDI.

I have not succeeded this time to make it work properly.
First I install the drivers M-Audio supplied me with the cd-rom,
it really did pas.J 'days have put the drivers to pass the latest version of the driver but it was even worse on windows 2000 pro it works fairly well (except for MIDI ), in short I will not m'taler the above I have already said enough in the forum.

Otherwise at the ASIO panel it is especially comprehensive and flexible routing
outputs.
The level-controller in faade is a good idea but I've never used.

As I said above drivers are Carment zero from windows 2000 pro.
I use it with Cubase SX, Reason, Sound Forge and vst, I get around 8ms latency which is a good result when meme.Elle suporte pretty good numbers a little abuse of that I use with Cubase VST Apart from its sacada when my processor is 100% correct but that's normal.

It's been 7 months that I have and I'm on my trs deu investisement, what I most AIM is its 8 audio outputs and two inputs with preamp, what I 'have the lowest AIM driver.Je find it expensive to pay a card that does not work and if it was again, I do not buy it.
See the source
Did you find this review helpful?yesno
Cookies help us improve performance, enhance user experience and deliver our services. By using our services, you agree to our use of cookies. Find out more.