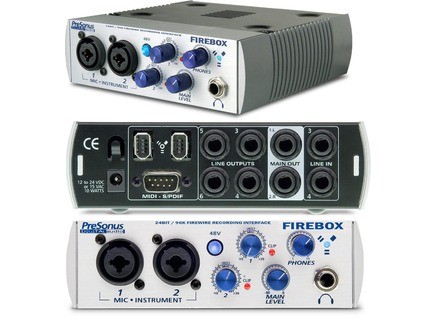 Value For Money : Excellent
View other reviews for this product:
Configuration at the time (2006), the first "dual core".
Instruments, keyboards and guitar to record with Ableton Live.
There was often a crackling sound when recording or listening, probably caused by the configuration PC.
That said, it's a very good material, provided with a set of software and plug-in interesting.
He had been advised at the time by the store where I bought it.
I use it forever!

Possible incompatibility of drivers, since on my setup dell inspiron 9400 with dual core, I often cracking that made some bad recording.
Perhaps this was caused by the firewire?
But it was in 2006, I think there would be no problems now with the new configurations.
Latency was rather limited, no perceptible lag, so pretty interesting.

Since 2006, he still serves.
I have not tried other models but at the time was already a good product, equipped with two FireWire.
Good value for money, I'm not disappointed, but if it were today I would think more and compare.
See the source
Did you find this review helpful?yesno
Cookies help us improve performance, enhance user experience and deliver our services. By using our services, you agree to our use of cookies. Find out more.