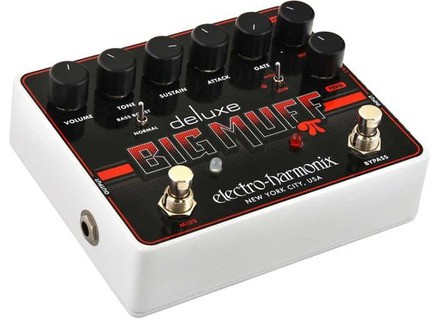 A review of the Electro-Harmonix Deluxe Big Muff Pi

For many guitarists, the first thing that comes to mind when they hear the term “fuzz box” is the Big Muff Pi from Electro-Harmonix. With the new Deluxe Big Muff Pi, the company has added some cool additional features to its classic fuzz pedal.

The Electro-Harmonix Deluxe Big Muff Pi is an enhanced version of the currently available Big Muff Pi pedal. It offers the same circuitry and controls (Volume, Tone and Sustain) but adds four additional control knobs, two toggle switches, a second foot pedal and an expression pedal input. The new unit also looks different, with a horizontal orientation rather than the vertical one of the standard model, and has a black, rather than silver background.

Two of the new knobs, one of the toggle switches, one of the footswitches and the expression-pedal input are all part of the most significant new feature, an adjustable mid-range section called MIDS EQ. It allows you to boost or cut the midrange at a user-adjustable frequency between 310Hz and 5Khz, giving you a lot of additional tone-shaping options. The Level control is neutral at 12 o’clock, and that position is detented, which makes it easy to find. Turning the knob to the left cuts midrange and turning it to the right boosts it.

The toggle switch next to those knobs is a two-position Q selector. High position sets the bandwidth of the selected mid frequency to a narrower setting and Low position to a broader one. The entire MIDS EQ section can be turned on an off with the MIDS footswitch, which sits on the bottom left of the pedal, on the opposite side from the switch that puts the unit into True Bypass mode.

The MIDS EQ can alter your sound pretty radically. You can scoop the midrange or boost it. When used in conjunction with the Tone knob, you have even more sonic control.

Here’s an example of a scooped midrange sound dialed in with the MIDS EQ controls. In the first two measures, the scooped effect is bypassed and in the second two it’s on.

In this example, a mid-range boost provides a more defined tone. Again, the first two measures have the MIDS EQ controls bypassed, and in the second two they’re in.

You do have to be judicious in how you set the MIDS EQ controls, or you can push the pedal toward some pretty weird and harsh sonic areas. I got the best results with relatively subtle settings.

My favorite new feature is the expression pedal input, which lets you plug-in a standard expression pedal (not included, I used a Boss EV-5) into the EXP input on the right side, and use the pedal to sweep the midrange. With the right combination of settings, pushing the pedal gives you a fuzz wah sound. I found the best setting for that was with the Frequency knob about 1 o’clock and the Level knob (boost/cut) at about 2 o’clock.

Here’s an example of a fuzz wah sound using the EV-5 pedal plugged into the Deluxe Big Muff Pi.

You can also create filter-sweep effects by boosting the upper mids and moving the pedal in one direction or the other. In the following example, I slowly moved the expression pedal up and down to create that  fieffect.

One additional tone shaping option, which is separate from the MIDS EQ section, is the Bass Boost switch, which provides a beefier bottom end when turned on. I tried it on two different amps, an Orange Crush 35LDX with a 10” speaker, and a Fender Blackface Twin reissue with 12” speakers, and, not surprisingly the boost was a lot more noticeable on the bigger speakers, where it really added some serious lows.

In the first two measures of this example, the Bass Boost is off, and in the second two it’s on.

Barbarians at the gate

One of the downsides of using a fuzz box or other distortion pedal is that you often end up with a lot of amp buzz or hum (or both) when you start cranking the gain (or in the case of this pedal, the Sustain). Electro-Harmonix addressed that directly by adding a noise gate circuit into the Deluxe Big Muff Pi. If you hear noise from the amp when you’re not playing, turn the Gate knob up slowly until the noise disappears. I did find myself wishing that the gate had a slower release time, as it cuts off the sound rather abruptly.

Here’s an example of the gate closing.

Also new is the Attack Control, which is designed to add clarity to single notes and chords. It’s effect is most noticeable when the Sustain control is at low settings. It makes the attacks of your notes and chords sharper, and adds additional brightness. It definitely makes your sound cut through more, but you have to be careful, because it can make the overall sound harsh, depending on the rest of the tone settings.

In this example, the first two measures are without the attack control on, and the second two are with it.

The Deluxe Big Muff Pi is powered by a 9-volt battery (included), and an optional power adapter (9V and interchangeable with Boss-style AC adapters). In order to change the battery, you have to first remove four screws from the bottom plate. I would much prefer a battery compartment that can be opened by hand, which would make on-the-gig changing a lot quicker and easier.

Pi of the tiger

The Deluxe Big Muff Pi ($120) gives you the same classic fuzz and sustain of the standard model, plus a lot more. It costs an extra $40, but the additional features make it a much more versatile unit. Although I was a bit underwhelmed by the new Attack parameter, the switchable MIDS EQ section is excellent, giving the pedal a lot more sonic flexibility, and the Gate is a very handy addition — even with its abrupt cutoff. Being able to connect an expression pedal for wah and other filter effects makes the Deluxe Big Muff Pi even sweeter.